The Tuolumne River is another important gold-bearing river that flows through the Central Valley. The river originates from the Yosemite National Park and flows for nearly 150 miles to join the San Joaquin River near Modesto. The river is made up of several fast flowing streams and a series of canyons. 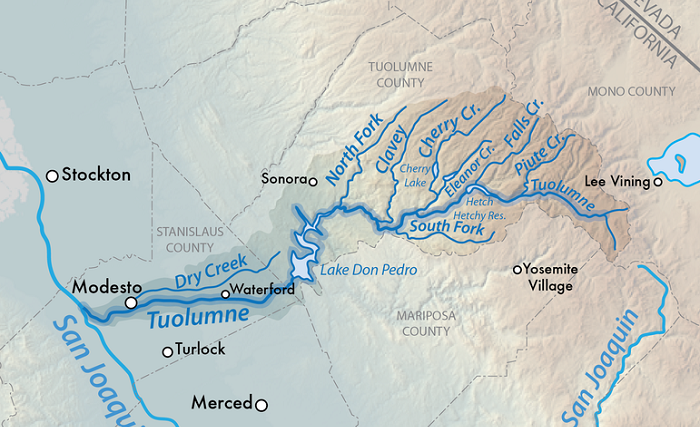 The Tuolumne River watershed in northern California. Located in the heart of the Mother Lode, gold is found throughout this region.

First Discovery of Gold on the Tuolumne

Gold was first discovered on the river in 1848 by Benjamin Wood and his team of protectors from Oregano at what was latter named Wood’s Creek. They then set up a mining camp near the creek and named it Wood’s Crossing.

Later that year Colonel George James and a team of prospectors from San Francisco discovered gold above Wood’s Creek and set up a mining camp that was letter named Jamestown.

During the same time Judge Tuttle struck gold at Mormon Creek and set up a mining camp named Tuttletown. Within a few years several other mining camps springs up along the river. Some of the major one include Shaws Flat, Don Pedro’s Bar, Sonoranian camp and Melones.

Shortly after words spread of the discovery of gold on the river and miners from all over the world swarmed the area. With more prospectors gold was discovered in many areas along the river.

The town of Jacksonville sprang up at the confluence of Wood’s Creek and the Tuolumne River. This area had over 5000 Chinese miners during the peak of gold production here.

With the growth in the number of miners along Tuolumne River and all of California in 1850s, lawlessness and conflict among the miners broke out.

Without uniform laws to govern mining many of the mining camps developed their own laws, however these laws were not sufficient.

To create uniformity the Foreign Miners Act was enacted in 1850. The law required foreign miners to pay a $20 tax each month for mining in California. A number of foreign miners left in protest while quite a number used violence to strike back.

These laws were primarily put into place due to prejudice against the Chinese Miners, who were common throughout the California goldfields. The law was later repealed.

With the movement of the miners, gold was also discovered foothills surrounding the river. In 1853 gold was in the Soulsbyville hills, and new mines were discovered such as Mary Ellen, Little Jessie, Confidence, Payboy and Independence Mine.

In 1855 gold was discovered at Arastraville just a few miles above the river. The development of the new mines away from the river was made possible with the improvement in the mining infrastructure, in particular the construction of ditches to supply water to the hydraulic operations. Hydraulic mining was eventually banned in the state of California, but for several years it accounted for spectacular quantities of placer gold being recovered in the California Mother Lode. 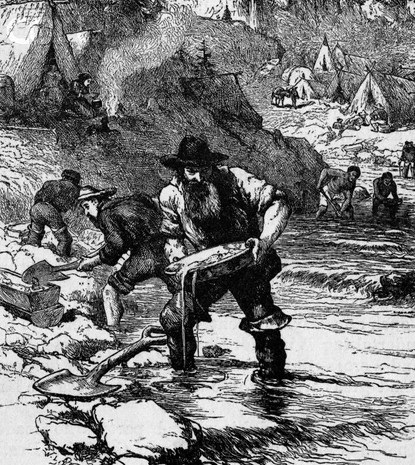 Illustration of early-day gold miners panning along the Tuolumne River.

This was one of the most popular early gold towns on the Tuolumne River. The mining town was established by Colonel George James just a mile east of the Woods Crossing in 1849. The town grew rapidly as mining in the area grew.
After the introduction of the foreign miners tax there was considerable unrest in the town. Colonel James also had problems with the residents and left without paying his debtors.

In 1850s the town grew to become an important commercial center thanks to the growth of smaller settlements around the town. Some of the major smaller settlement that sprung up around Jamestown in the 1850s includes Chinese Camp which was about ten miles to the south of Sonora. Others include Poverty Hill, Yorktown, Algerine, Camp Seco and Montezuma among others.

Jacksonville was another important town during the early years of the Californian gold rush. It was one of the largest towns on the Tuolumne River at the height of the gold rush. The town had a number of general stores, luxury hotels saloons and a post office.

The town was established on the Tuolumne River in 1849 at site where the Don Pedro Reservoir stands by Julian Smart who planted a garden and sold vegetables and fruits to miners. With the settlement of miners around the garden a town grew and the mining activity destroyed Julian’s original garden. The town was named after Colonel Alden Jackson who visited the camp before establishing the Jackson town about 35 miles away. With decline in mining the town began to decline but remained occupied until 1960s when it was flooded by the expanded Don Pedro Reservoir.

And: The Lost Goose Egg Mine in El Dorado County

While the heydays of gold mining may be over in Tuolumne County, good quantities of gold are still being found in the river even today. Fine placer gold can still be panned along the banks of the river, and large gold nuggets have also been discovered along the river in the recent past.

The Stanislaus National Forest is the source of the waters that flow into the Tuolumne River. These public lands offer great recreational opportunities for gold prospecting. Since the gold rush days the forest waters have been busy with gold miners trying their luck, since gold can be found in most of the creeks that flow into the Tuolumne River along with the river itself.