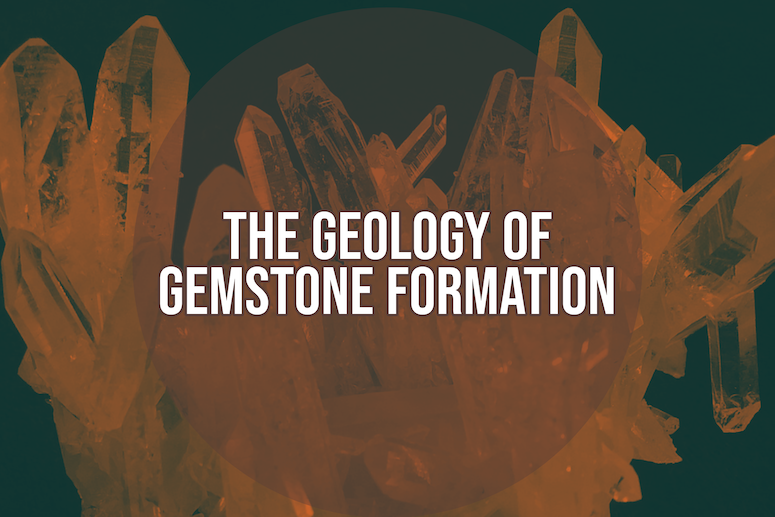 The majority of the gems form naturally within the Earth, shaping up as minerals and crystals. Most of the gems form as crystals, which are basically solid that boosts highly organized and ordered atoms, arranged in repetitive patterns known as crystal systems.

As we learn about the crystallization process of minerals and the geological patterns that occur in the formation of gems, we increase our understanding of the properties observed in various gemstones.

Crystals require five basic aspects in their formation, and these include, time, ingredients, temperature, pressure, and space. Within the deeper layers of the Earth beneath the surface, crystal and gemstone formation occurs with highly complex minerals, and majority of the solutions are brimming with a wide variety of minerals.

In general, there are 4 basic processes in which gemstones can form. Let’s take a brief look at how they all work.

Gemstones and minerals like ruby, diamonds, peridot, and sapphire are formed within the mantle of the earth, in extremely high temperatures. These gems are some of the most valuable and rare.

They emerge closer to the surface after explosive eruptions, soil erosions and weather conditions that allow them to be discovered. In the case of diamonds, geologists have found that they crystalize in the magma just beneath the crust and they tend to emerge around 150 miles beneath the surface, amidst soaring temperatures.

The magma can travel through the crust at a much more ferocious speed than volcanic eruptions, and during this process, it dissolves rocks and takes them to the surface. Often, the pressure, speed and soaring temperatures can make the diamonds vaporize. The quick transitions in pressure and temperature can also prevent their formation.

Crystals within the crust often experience breakage because of high temperature fluctuation. The conditions that result in gemstone creation are rare, but finding areas where crystals have formed and remain intact are even rarer. This is why larger gemstones are exceptionally hard to find.

This process of gemstone formation occurs when mineral rich water-bodies are allowed to cool off. Their formation occurs in super-saturated water that boosts a wide variety of various minerals, hidden into the cracks and cavities (vugs) of the earth. When this water is allowed to naturally cool down, these minerals to crystalize, giving birth to gemstones. This even occurs with hydrothermal gold deposits which can produce crystalline gold formations.

Some of the best known hydrothermal gemstone mines are found in Columbia which are brimming with chromium and given birth to the finest and vibrantly green emeralds. There are many other examples of hydrothermal gem deposits around the world.

One interesting note is how the science behind hydrothermal gems is how scientists have been able to recreate a variety of lab-created stones through the process of hydrothermal synthesis. It has allowed for the man-made creation of emeralds, rubies, quartz and alexandrite among others.

It is interesting to note that majority of the gemstones, including some of the most beautiful including garnet, sapphire, ruby and spinel, are formed through the natural process of metamorphism.

This process occurs when the minerals are bound together with great pressure and exposed to the heat generated by the movement of the tectonic plates. This is why many of the gem deposits around the world are located near fault lines and areas where these different plates interact with each other and generate extreme heat and pressure.

Most of the valuable gemstones that people think of are formed through one of the processes mentioned above. Sedimentary rocks are generally not as colorful or beautiful, but there are a few examples of sedimentary rocks that are beautiful and popular with collectors.

Some types of gems such as azurite, malachite, and opals are formed from the water depositing sediments. The creation of sedimentary gemstones takes place when water interacts with the minerals present on the surface of the earth.
They water, rich with minerals, travels down to the cavities and cracks present in the deeper layer of the earth beneath the surface, and stores up layers of minerals.

Next: Dangers in the World’s Deepest Mines