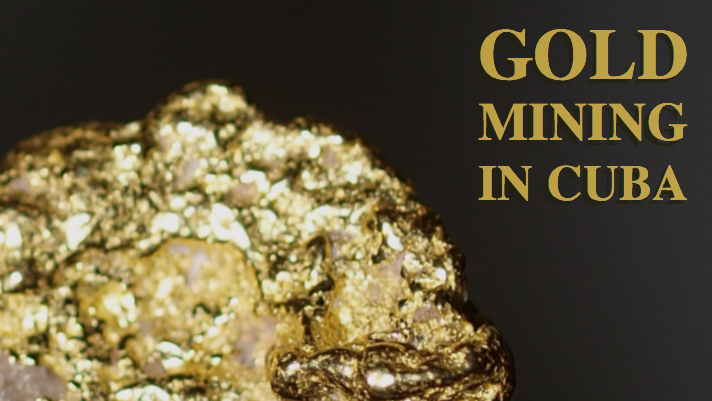 With the recent changes to US – Cuba relations, it is an interesting time for the Cuban economy. And this is certainly true for the mining industry as well. There is considerable mineral wealth in the country, including gold.

The early mining industry, like most other Central American countries in the region, began when Spanish explorers reached the Island in the early 16th century. The Spanish enslaved the local villagers and made them work the placer deposits that were found on the island.

Placer mining during this time was quite primitive, but because the deposits were virtually untapped, a considerable amount of gold was found.

Cuba is part of an island chain in the Caribbean, and although there are no active volcanoes in Cuba today, it had a violent geological past resulting in gold and other metal deposits being found in numerous locations around the island. The gold deposits are generally found in igneous and metamorphic rocks, where free-milling gold is found in stained quartz deposits. Gold is also found associated with arsenopyrite, calchopyrite, and telluride ores.

There are several distinct mining districts in Cuba where gold has been mined coming from various distinct lode sources.

Many gold mines are located near Santa Clara in central Cuba. Some of these mines date back to the early Spanish conquest. The San Jose is one of the larger mines in this district and produces free-milling gold in dirty quartz veins.

To the east is the city of Gamaguey. There are several mines in this region including the Florencia Mine. Some very rich gold veins were discovered in this region and worked at numerous mines and prospects where veins were scattered and unstructured. The total production is unknown, but some of these discoveries were noted to be quite rich.

Still further east is Holguin. The Nuevo Potosi is the largest mine here, producing both gold and silver from within pyrite and galena sources. Again, total production is unknown as no accurate records were taken during the peak of mining activity here.

The Sun Mine is one of the larger mines in Cuba located near the town of Bayamo. This mine has been worked in recent years and considerable gold has been mined.

Gold and other minerals have been mined on Isla de la Juventud, an island on the south side of the main country. Considerable quartz veins have been charted across the island which produced high-grade gold deposits in many locations. The Delita concession is located on this island, and has an estimated reserve of 1.5 million ounces of gold. There is an open pit mine that is tentatively planned to exploit this resource.

There are over 400 mining companies operating in Cuba, which prove just how rich the mineral wealth of the country is. Although US residents have been excluded from doing business here until just recently (2015), this has not prevented other companies based in other countries from dealing with Cuba to exploit the mineral deposits here.

Placer mining was the earliest form of mining when the Spanish first arrived in Cuba, but after the placer were exhausted it was the lode sources that continued to produce. Today, there is only limited placer mining taking place in Cuba.

Of course, there is always the possibility of locating placer deposits near areas that have been mining free-milling gold sources. Locals still work many of the same rivers and streams that were mined as early as the 16th century.

Some of the noteworthy rivers that will produce placer gold are Rio Buey and Rio Bayamo near Bayamo. In the Santa Clara district, placers are known to exist in Rio Ochoa, Rio Agabama, and Rio Guaimaro. Any of the drainages that are located within the major mining districts are certainly work exploring further.

Cuba is home to many legitimate lost mine stories. During the 16th century, many rich areas were worked and abandoned by the Spanish for various reasons. Disease was known to have killed many of the slave miners working the mines, and the locations were eventually abandoned.

The climate of Cuba is considered semitropical, but the terrain varies depending on location. Access is not nearly as limiting as many other countries in Central America which are dense jungle with limited access roads.

With the recent change in US – Cuban relations, perhaps Cuba will soon be a prospecting destination for gold prospectors in the southern United States.