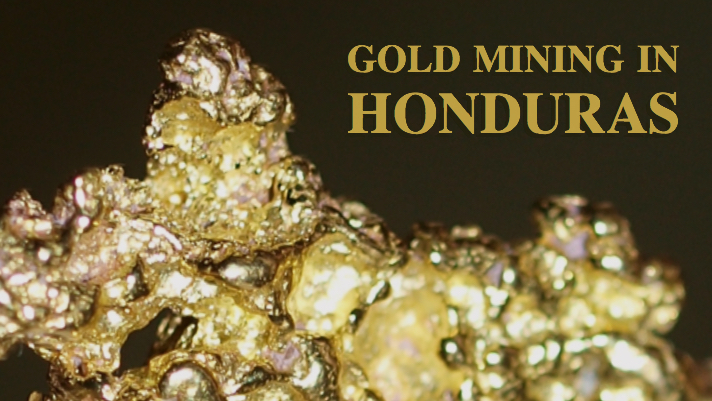 Honduras could potentially be the least prospected country in Central America. Dense jungles and horrible economic conditions have made mining efforts extremely challenging. The country most certainly has vast mineral wealth, and there is active mining taking place here today.

The first real interest in gold in Honduras came around 1509, when the first Spanish explorers first began inhabiting the area. A few decades after their arrival, there were several hundred small mines operating around the town of Gracias.

Like all of Central America, the geology of the region is favorable for gold other valuable minerals. The country is located where numerous tectonic plates come together, which causes volcanic activity, faulting, and shearing, which is commonly associated with gold. The volcanism is responsible for bringing gold and other metallic minerals to the surface.

There are numerous active and dormant volcanos in Honduras today.

Most geologists believe that the gold deposits in Honduras were likely created around heat vents that were once at the bottom of the ocean, and eventually pushed up to the surface due repeated collision of tectonic plates. The result of this movement has created a very scattered deposition of gold.

The extent of faulting and fracturing has been a challenge for exploration mining companies in Honduras, as gold occurrences are quite often small and fragmented due to this activity.

Small scale placer mining has taken place in all provinces in the country. The jungle environment and heavy overburden creates a challenge to accessing rich placer deposits, but they do exist in many waterways in the country. The Rio Coco River that divides Honduras and Nicaragua has long been known to contain placer gold. The Rio Cuaymel and Patuca Rivers are also known to have been mined by locals and the Spanish settlers. Rio Guayape also contains gold, as do most of the watercourses in this area.

During the 16th century, it was silver that got the most attention from the Spaniards. Like Mexico and other countries in the region, there is considerable silver here. Some of the earliest mines were located around Danli, Tegucigalpa, Gracias, and Santa Rosa. Many of these lode mines also produced gold as a by-product of the silver mines.

El Mochito is the largest lode mine operating in Honduras, and is a major producer of both silver and zinc. Gold found here is limited, but many of the surrounding mines do have good gold output.

The San Martin Mine has been one of the richest gold mines in the country, and has been producing 100,000 ounces of gold per year.

The San Andres is another rich gold mine that has been producing in the neighborhood of 100,000 ounces each year of operation.

The Las Vueltas Mine is located a short distance from the border of Guatemala, and is another significant producer.

All of the large-scale mining activity in Honduras comes from outside interests, primarily from Canadian mining companies who have done the exploration work to establish these operations. Nearly all of the commercial mines operating in Honduras are exploiting lode sources of gold, rather than placers.

And: The Untapped Mineral Wealth of Ecuador

Placers Deposits in the Jungle

Mining placer deposits profitably can be challenging for large companies. Since the richness and extent of placers can have very spotty and unpredictable distribution, it is nearly impossible to operate a placer mining operation profitably.

Access is a considerable issue for anyone who is interested in prospecting in Honduras. Limited roads penetrating the jungle have most certainly hampered exploration efforts throughout the country. Thick soils covering bedrock also prevent access to the better placer grounds. This is the reason that Honduras and many other Latin American countries still have considerable amounts of unexploited mineral deposits waiting to be discovered.

The other fact that limits the amount of exploration here is the current economic conditions in the country. Honduras is one of the poorest countries in the Western Hemisphere, and the poverty not only creates logistical challenges, but safety issues as well. Travel can be risky. Murder rates are high, mugging is common place, and some areas are just generally unsafe.

These risks are certainly true for gringos, especially if it becomes known that you may have gold with you. Perhaps this reason, more than any other, is why outside interest from small-scale miners has been limited and will likely remain that way for some time.

Next: Many Challenges Mining Gold in Guatemala