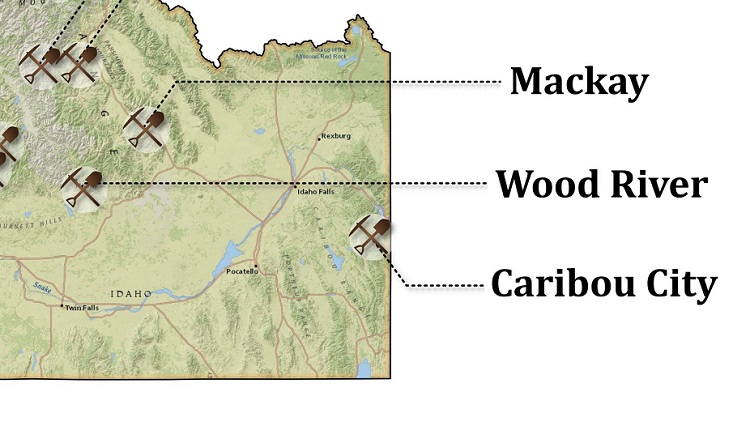 Eastern Idaho doesn’t have an abundance of gold, but there are a handful of old mining towns where gold has been found. Mackey, Caribou City, and the Wood River Valley are shown on the map above. Lead, silver, and gold has been found in these places.

Eastern Idaho is not a particularly rich area when it comes to mineral resources when compared to most other parts of the state. Most of the gold and silver mining takes place in the mountainous parts of central Idaho, but there are a few random mining camps located in eastern Idaho too. You can find rich mineral deposits within a few hours of Pocatello and Idaho Falls.

The old mining town of Caribou City is located high on the northeast side of Caribou Mountain. This is one of the only mining towns in Eastern Idaho that could truly be called a gold rush, and for a short time it attracted serious interest.

A few mines area scattered around the Caribou Mountains, including the Evergreen Mine and the Monte Cristo Mine.

There are a few noteworthy mining districts in Eastern Idaho. Gilmore was a lead and silver mining district, although a small amount of gold was found as a byproduct. Whether any gold could be found by panning the nearby streams is unknown, but may be worth investigating.

Gilmore suffered from accessibility issues and never really thrived as a mining community. Now only a few old buildings remain. Most of the mining was done in Moon Gulch, Liberty Gulch, Sourdough Gulch, and Meadowlake Creek.

Mackay was another mining town in Eastern Idaho that was a major producer in its day. Although this area was primarily known for copper, there was also millions of dollars-worth of gold and silver that came out of the White Knob Mountains west and south of Mackay.

The majority of the old workings area up Rio Grande Canyon and down along Cliff Creek.

Although it’s pushing the limits of Eastern Idaho, the Wood River mining district around the towns of Hailey, Ketchum, and Bellevue is easily accessible to people in Eastern Idaho, and this area holds great potential for gold prospecting.

Although the primary minerals mined here were silver and lead, many thousands of ounces of gold have also come out of this area. The first mineral discoveries in this area occurred back in 1862 by miners on their way to the Boise Basin gold rush, but Indian hostilities in the region discouraged interest for several decades.

The largest rush to this area occurred in 1880.

A rich area east of Ketchum was discovered in Parker Gulch. Some of the larger producers in this area were the June Day Mine, Montgomery Mine, St. Louis Mine, Parker Mine, and Amicus Mine. West of Ketchum, many prospects can be found along Warm Springs Creek near Rooks Creek.

Another rich area was located in the mountains just west of Hailey and Bellevue. Up the valleys of Croy Creek, Bullion Gulch, Elephant Gulch, Liberty Gulch, Kelly Gulch, and Croesus Gulch had extensive mining. Even the drainages that flow directly into the Wood River such as Colorado Gulch, Star Gulch, and Mammoth Gulch have historic mining activity.

Nearly all of these mines were primarily lead and silver mines, with gold as a byproduct. Placer gold can be found in most of the creeks throughout this area.

Gold mining has occurred in the Black Pine Mountain Range since the early 1900’s, and the area has produced a considerable amount of gold from one major open pit mine. All gold production here has come as a result of lode mining.

Other Areas to Consider Prospecting

Depending on where you live in Eastern Idaho, it may be worth your time explore some nearby states. Just to the north in Montana there were some very large gold rushes that produced millions of dollars in gold. Wyoming also has several gold mining towns that are still good places to prospect.