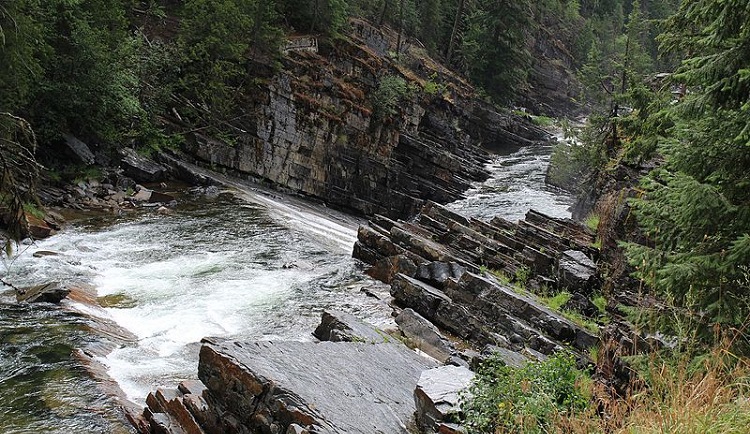 Most of the gold in Montana is found in the more mountainous western section of the state.

There has been mining in Montana as early as the 1850s, with the peak of mining taking place during the 1860s. In the mid-20th century bucket dredges worked many creek and rivers in Montana, resulting in millions of ounces in gold.

Gold panning on Montana’s Rivers will still produce gold nuggets and fine gold. Below are 7 Montana Rivers that are worth checking out.

Being the major river that spans across Montana, there are several locations along the Missouri River where you can find gold.

Placer gold can be found in the Missouri River south of the town of Cascade. These concentrations most likely come from the minor districts located above Little Prickly Pear Creek.

Another exceptionally rich gold mining area can be found northeast of Lake Helena, Hauser Lake, and around Canyon Ferry. El Dorado Bar is one of these areas, on the east banks of the Missouri River near the mouth of Soup Creek. Of particular interest in this area are the natural occurrences of sapphires. Dana’s bar also attracted interest by early miners.

Other good areas in the area include McCune Bar, Gruel Bar, Spokane Bar, and French Bar which was reported to be the richest. These were all deposits located along the Missouri River.

Indian Creek is a tributary to the Missouri River just outside of the town of Townsend. Most of the early mining took place just west of Townsend and rich gravels were found in ancient tertiary bench deposits.

Gold was first discovered in French Creek, a tributary to the Big Hole River, in 1864. Productions records are very inaccurate, but it is estimated that easily $5,000,000 worth of gold was mined here in just the first few years after discovery. The district is near the Continental Divide.

Placers have been worked along the Big Hole River as well as numerous tributaries such as on Basin Creek, Fish Creek, and over the mountain to the south on Camp Creek, Soap Gulch, and Moose Creek that flow into the Big Hole River.

Boulder River has fairly limited gold occurrences, but several of its tributaries were mined extensively by the early-day miners in Montana.

Near the town of Basin you will find Cataract Creek, a tributary to the Boulder River. A decent amount of gold mining has taken place here by small-scale sluicing and hydraulic operations. Overland Creek, Rocker Creek, and the surrounding gulches were also quite rich. High-ore Creek and Muskrat Creek also have some placer deposits in this area. Basin Creek, Red Rock, and Lowland Creeks also contain placers around the town of Basin.

And: This Montana Town has Gold Buried Right Under Main Street

There are numerous areas around the town of Lincoln that are productive for gold. The Blackfoot River contains gold, along with most of the tributaries in this area.

The Garnet mountain range is the source of the gold found in Elk Creek and the Blackfoot River.

There are numerous areas around the town of Lincoln that are productive for gold. The Blackfoot River contains gold, along with most of the tributaries in this area.

Yaak River was first reported to have placer gold in 1864. Significant amounts of placer gold weren’t reported during the gold-rush era, but mining picked up in later years.

By the 1880s, placer gold finds increased, with over 10,000 ounces in lode gold being reported from quartz-pyrite veins in sandstone.

You’ll also find smaller tributaries of Yaak River along the way up the mountain. Most of the land is national forest that is open to prospecting, and there is gold in many of these creeks.

By 1954, 100,000 ounces of placer gold had been recovered from Ninemile Creek, a tributary of Clark Fork River. Lode gold was eventually found on upper Kennedy Creek.

The ancient flows of glacial Lake Missoula flowing into the Clark Fork River thousands of years ago helped uncover the placer gold findings for the early Montana miners.

Gold Creek is a tributary for the Clark Fork River. Hydraulic giants washed bench deposits on Gold Creek, Pioneer Creek, French Gulch, and Wilson Bar. Pikes Peak Creek was also mined. Pioneer, French, and Squaw Creeks were the most profitable in the area.

Many rich gold deposits have been worked along the Bitterroot River.

Hughes Creek is a tributary that feeds gold into the Bitterroot River in Ravalli County. It accounted for 88% of the county’s placer gold from 1904-1948. A number of mines came in to explore the area, and small batches of lode gold have been recorded, but no further great successes have been reported.

As with many rivers in Western Montana, panning along gravel bars will produce some fine gold.