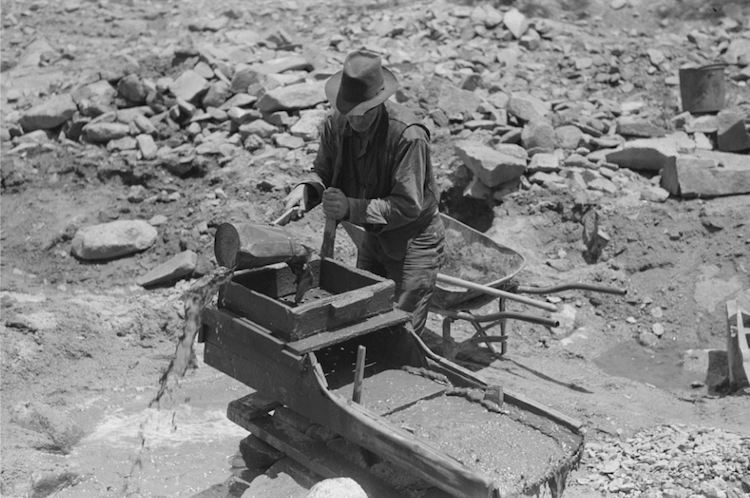 Early gold miner using a rocker box in New Mexico. Rockers worked well in locations with limited water and were common during the early Gold Rush in the West.

Throughout the history of gold exploration, which really includes most of recorded history, many different techniques were created for separating placer gold from the surrounding gravel. One of the most famous old school methods, the rocker box, can still be used today, although it has mostly fallen out of favor…

Like so many other famous inventions from many years ago, tools very similar to a rocker were most likely developed in many different places over the years.

You may have heard the old saying “Success has many fathers, but failure is an orphan.” When it comes to successful inventions, one might say something like many people claim to be the creator of a success, but failures are orphans because nobody wants to take responsibility for failing. Isaac Humphrey may or may not have introduced the rocker box to the California gold fields around 1848 during the Gold Rush. 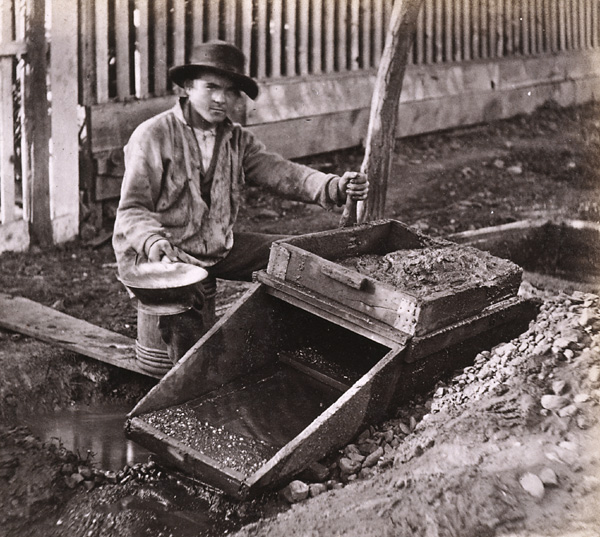 Popular Use in the Early Goldfields

The rocker box replaced panning for many prospectors searching for placer gold deposits, particularly once a deposit was found and the miner wanted to process more gravel. The process of using a rocker box has changed little since first introduced. Rocker boxes are built in three parts, which include a sluice box, a screen, and an apron.

When using a rocker box, gravel would be shoveled into the box onto a screen. This catches the coarser materials. Water would then be poured over the gravel, often using a homemade ladle made from a tin can. The rocker box then displays one of its advantages as the rockers it is mounted on allow a miner to rock the box which helps wash the waste gravel from over top the gold.

The floor of the box holds the riffles in which the gold that is washed off of the gravel is caught. Fine material is washed through the openings by the water onto an inclined apron. The apron can be made of a variety of materials such as a blanket, carpet, canvas, rubber mat, burlap or a copper plate. Whatever the miner had on hand.

The apron is stretched loosely over a frame. It has a pocket in which coarse gold can be collected. Riffles below the apron help to collect gold before discharge. 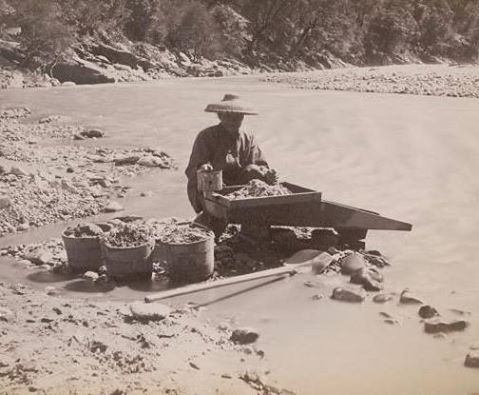 A Chinese miner in California uses a rocker to find some gold.

The rocker box’s greatest advantage was efficiency. At least twice as much gravel can be worked per day by one miner using a rocker as compared to the gold pan

, and it was less laborious. This advantage is multiplied when two miners work as a team. One miner would shovel the gravel into the box while another poured water over the gravel.

One disadvantage of the rocker box was the amount of fine gold that would get passed over in this process and be lost. However, many miners felt the much larger quantity of gold recovered by the increased speed more than made up for the amount of gold lost. 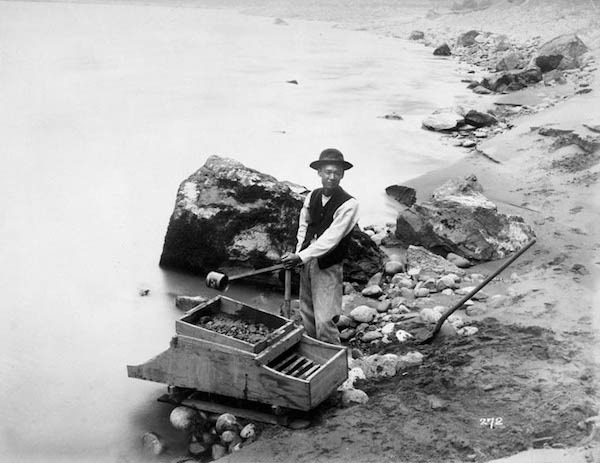 Also, some miners used to add small amounts of mercury to the bottom of the rocker in an effort to trap more of this fine gold dust. They would then heat the mercury to vaporize it, leaving the gold as residue. Now, thanks to a welcome increase in our knowledge of health risks, we know about the dangers of mercury poisoning.

Remember, before you go out and kill yourself, this is past tense. Mercury is rarely by modern prospectors today, and certainly not out in the field where it will get into the waterways. We also know now that, to make things even worse, the most lethal form of mercury poisoning is that which is inhaled. 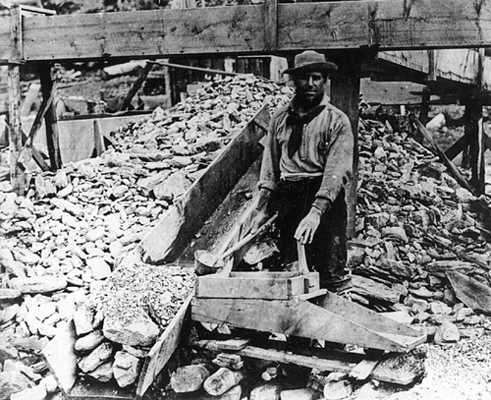 A miner in the Cariboo Mining District of British Columbia.

Most problems eventually find solutions. The rocker box’s most serious flaw was the amount of gold washed away by the water and never recovered. Thanks to human adaptability, this difficulty would be solved by several inventions.

The rocker box worked alright, but a sluice box generally had better recovery rates. As equipment has improved over the past century, a whole variety of different tools have been devised to help increase gold recovery rates. Such things as improved miner’s moss

for sluice boxes is one of the biggest gains.

A rocker box can be used with much less water than is required with a sluice, but equipment like the Blue Bowl Concentrator and the Gold Cube which use small electric pumps have helped considerably with this. There are also sluice types that are designed for low water flow situations.