I wander around the early goldfields of the Western United States and try to find gold that the old-timers missed. Lately I’ve been thinking about getting a new metal detector.

Metal detectors have been marketed to gold miners for over 50 years. In fact, I recently picked up an old prospecting magazine from 1965, and was surprised to see that there were actually several advertisements selling metal detectors for gold. 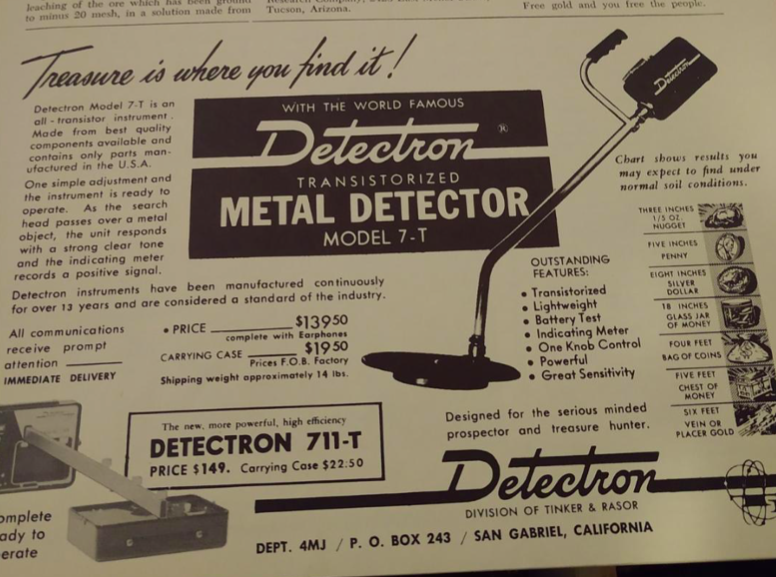 An early metal detector advertisement in the California Mining Journal, 1965.

Looking back, we know that those detectors from this era were pretty much useless as prospecting tools; it took a few more decades to produce a decent gold detector that could handle the “hot” mineralized soils found in most of the goldfields. However, by the 1980’s there were a few detectors released that actually worked pretty well. Some of those early detectorists really cleaned up!

Every few years a new detector comes out that get us gold prospectors excited. The latest greatest gadget that will have us digging up treasure like never before!

I suppose it is human nature to look for new products that will make things easier for us. And certainly, new models of metal detectors have some improvements that make them very attractive. I have always been the first to tell people that there is no need to dismiss those older metal detectors just because something new comes out.

If they could find gold yesterday, then they can still find gold today! So YES, there are some awesome metal detectors that have come on the market recently. There’s a good chance I am going to upgrade and get one myself. Just don’t take that to mean that you NEED to get the newest, latest model detector.

In my opinion, the technological advances over the past few decades have been modest to put it simply. For gold hunters, the biggest advancement was the introduction of Pulse Induction technology. These were the early Minelab PI detectors like the SD2000 that came out in 1995. In the following years, Minelab improved their offerings by introducing the GP Extreme, GP3000 and GP3500, all the way up to the current offerings like the GPX4500 and GPX5000.

It’s been 25 years since the early PI machines came out. Have they improved over the years? Absolutely! Are the current offerings leaps and bounds above those older models? That would be up for debate.

Yes, the newer detectors are better. Improvements have been implemented that reduce ground noise, increase sensitivity on small and crystalline gold targets, and they are generally smoother running machines.

The GPZ7000 provided yet another advancement, but even the early users of this detector didn’t seem to “clean up” the way many people anticipated. They definitely hit on some smaller and specimen type gold, but if we are talking about finding big nuggets at depth, a GPX4500 (my current PI gold detector) will do just as well.

Up until now we’ve been talking about the pulse induction type detectors, but what about the more common and popular (due to lower cost) VLF detectors?

Two specific detectors have caught my eye, the Minelab Gold Monster 1000 and the Minelab Equinox 800. I’ve seen both in action and simply put, they are better than my Fisher Gold Bug 2. That is hard for me to say, because for nearly 20 years the GB2 has been the best detector on the market for small gold. It took a long time, but that old detector has finally been dethroned. 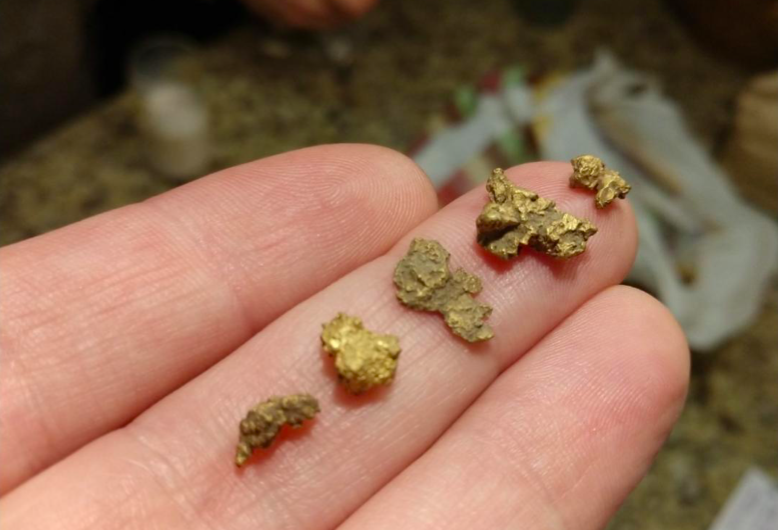 The Value of “Knowing” your Detector

I am going to pick up a Minelab Equinox 800 and use it when I am hunting for small gold on bedrock. After seeing it in action I am confident that it will be an improvement over my trusty Gold Bug, and will find me more gold.

However, there is a value of knowing your detector and understanding the sounds it makes. I’ve been using that old Gold Bug for a decade now, and I know it inside and out. Upgrading to a new metal detector will eventually be an improvement, but it is going to take some time.

This is something anyone should consider if they are getting a new detector. Are you comfortable with your current detector? How often do you get out and hunt? Will you be able to dedicate enough time to really learn and understand it?

I know lots of guys that are extremely good gold hunters, and they are sticking with their older detectors simply because they are comfortable with them. Why switch things up if they are working for you?

I can’t argue with that. Understanding your detector is more important than the specific detector that you are using. If you aren’t going to be able to dedicate the time needed to get good with a new gold detector then you are better off sticking with what you have.

Of course cost is always a consideration and not a small one. The newest gold detector prices are getting downright ridiculous! The introductory price of the GPZ7000 was nearly $10,000! You’re going to have to find a lot of gold to justify that purchase!

Metal detectors are pretty much like any other type of electronics… they depreciate over time. Just a few years after the GPZ7000 came out, I’m now seeing used ones for sale for around $5000-$6000, nearly half price.

Old VLF detectors are the same. Those $800 models will probably be worth around $400 in a few years. Something to keep in mind when you make a purchase.

Different People, Different Goals (“Will it Pay for Itself?”) 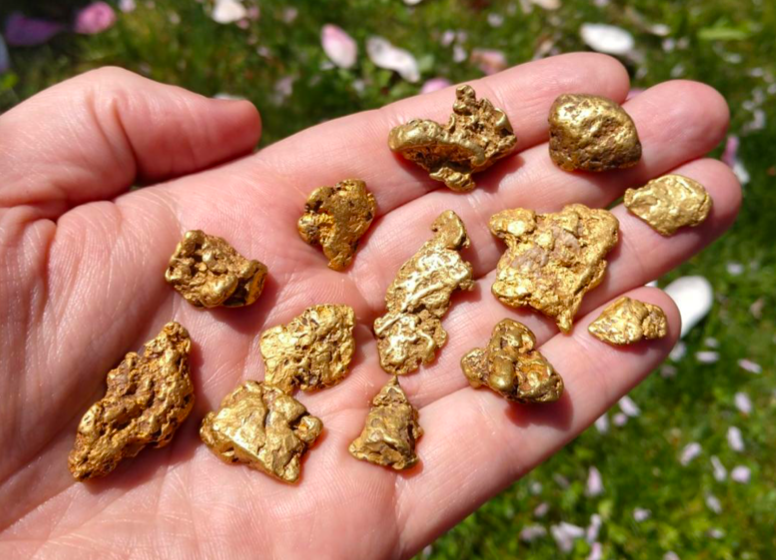 I can’t tell you whether an upgrade to a new detector is worth it for you. I can certainly tell you that the latest models to hit the market are an improvement over the old tech, but not a vast improvement. A Gold Bug 2 or Whites GoldMaster will find almost as much gold in the right hands.

That price difference between the GPX4500 and GPZ7000 equates to about 4 ounces of gold. Are you likely to find 4 ounces MORE gold by swinging the GPZ7000 vs the GPX4500? Maybe if you invest a lot of time in the goldfields, but for the average casual prospector I think it would take a very long time to do it.

However, some people simply want the “best” and don’t care about the return on their investment. That is perfectly fine!

For me, I am currently happy with my GPX4500. It’s a solid performing PI detector that I am comfortable with and love. On the other hand, my Gold Bug 2 is getting retired. It has served me well, but I am going to get a Minelab Equinox 800 and start using it for my bedrock gold hunting.

Next: How to Effectively Work a Gold Nugget Patch with a Metal Detector