Most people do not see the name Turkey as being synonymous with gold mining, but the country actually has some of the oldest mines in the world. History tells us that gold was discovered as early as 9000 BC in Turkey and showed up in Turkish artifacts as early as 3000 BC.

Gold was long used in Anatolia (ancient Turkey) as a form of currency. The country isn’t given enough credit for its long and storied gold history considering so much wealth has come out of the ground here.

A Variety of Gold

Most of the gold found in Turkey is in the western part of the country but not all of it. The larger finds have come from pockets and epithermal deposits in quartz rock veins that are found trapped in layers of volcanic rock.

The earliest gold deposits that were mined were quite different, as they were found within the alluvial material that was found in such areas as the Gediz River region. These gold sources were worked using very primitive placer mining methods thousands of years ago, and it was not until these alluvial sands had been heavily worked that attention turned to finding the gold at its source within the quartz rock.

Gold Throughout the Years

Some of the most ancient finds were along the southern slopes of the Verila and Vitosha mountains. In the same area there were also placer deposits that were mined in the upper Struma River too. 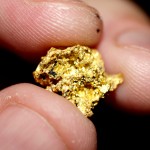 There are not a lot of detailed accounts about gold production in the early years in Turkey but it is well know there were sporadic gold rushes in Galatia, Lydia, Phrygia, and Troy. Many of these are the same areas that are looked at today when experts are determining where they will set up their new mines.

The biggest mine that is currently operating was built in 2006 by the world famous Eldorado Mining Company; it is called the Uşak- Kişladag Gold Mine and is rumored to have enough gold reserves to keep the mine going well into the future.

Other major mines include the Ovacik Mine, the Mastra Gold Mine northeast of the village of Mastra, The Copler Mine in Eastern Turkey southwest of Erzincan, and the Kaymaz Mine in Eskisehir Province.

All of these mines also produce a considerable amount of silver as a by-product of the gold production as well. The ores at these mines are considered low-grade and require high volume operations to profitably extract these minerals. Heap leaching is used to extract gold from these ores.

The Future is Bright

Many experts feel that Turkey is a country that is poised to become a major player in gold production in the very near future; there is believed to be some 800 tons of gold deposits in the country.

Not only do geologists believe there are still a lot of undiscovered pockets of gold in Turkey, but the country has made huge strides in both their mining infrastructure and mining laws. This makes Turkey an attractive investment over places such as the Canada and Australia where gold has been commercially mined for centuries now due to their favorable mining regulations. Some of the gold producing countries like Turkey that may not have been considered as safe as other places are now really attracting a lot of attention as the price of gold rises.

And: Uncertain Future of Mining in Romania

Statistics seem to back this up too as Turkey has gone from producing very little gold by commercial operations in the year 2000 to producing 31 tons of gold in 2014; that figure makes them the largest gold production country in the Middle East by far. Prior to that, most of the gold production was coming from small-scale artisanal mining, and did not account for any considerable (or recorded) production.

Investors interested in mining there are also encouraged by the fact seven mines have been built there in the over the past 15 years, and many also consider gold production for the country is only in its infancy.

Although gold mining may only be in its infancy in many parts of Turkey, many other minerals have been mined here extensively over the past centuries. Some of Turkey’s major minerals also include boron, feldspar, and marble.

In the very near future Turkey could possibly start seeing it name become synonymous with gold production along with the other major players in the mining industry. It is now ranked among the top 30 gold producing countries in the world, but could likely rise in status as more of mines come into production over the coming decades.