is a compact, all terrain and waterproof type metal detector that is just as capable underwater as it is in the desert. It is one of the few gold-specific types of pulse induction (PI) metal detectors that can be used underwater to find gold, and it does an exceptional job at it. Many areas that were once out of reach from other metal detectors are now accessible with the SDC 2300.

While the rugged, waterproof capabilities of this detector are a major selling point for many prospectors, it has also become one of the most popular detectors for use on dry land also. 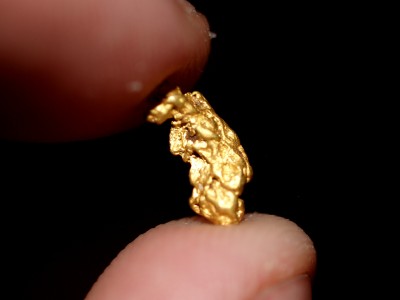 The SDC 2300 was built to be extremely sensitive to sub-gram gold. In fact this may be the major selling point of this detector, as it has proven effective at cleaning up behind earlier model PI detectors that were less sensitive to the smaller nuggets. This was clearly evident during the first year of its release, when many Australian gold prospectors were finding considerable amounts of gold in old “hammered” patches that many considered to be worked out long ago.

Popular Features of the SDC 2300

It was designed to work in the toughest conditions (designed to military standards) and to be waterproof up to 10 feet. It’s easy to use and since it’s waterproof to up to 10 feet, it allows for easy transition from land to water. This opens up many shallow water location where other detectors simply could not go just a few years ago.

that can be used underwater, but they use VLF technology that does not detect nearly as deep as the SDC 2300 does.

Even if you don’t plan to actually hunt underwater with the SDC 2300, the waterproof feature still allows you to use it in the rain, allowing the prospectors to stay longer in the goldfield.

The ease of use SDC 2300 provides is also one of the properties why its popular among prospectors. SDC 2300 has LED indicators that show the target’s signal strength, threshold level and also the battery status. Small or deep targets causes only 2-3 LED indicators to light up, but if the target is large or in shallow soil, then all the indicators may light up.

There are 9 threshold levels on the SDC 2300 and each press on the button increases the threshold level. The audio button adjusts the threshold level and can also be used to set the low or high audio tone according to the prospectors preferences. The noise cancellation button, once pressed, reduces signals from external interference (for example power lines).

One of the unique technologies that makes SDC 2300 stand out is its advanced MPF (Multi Period Fast) Pulse Induction technology. In normal pulse induction metal detectors, extreme sensitivity to very small amount of gold comes at the cost of more ground noise in magnetic soils. However, in SDC 2300, MPF quickly switches between the transmit and the receive detector signals. This means that there is minimal residual transmit signals in the receiving cycle. This enables the SDC 2300 to have very clear and sharp detection for a very small amount of gold.

This detector also comes hardwired with a small 8” round coil, making it perfect for hunting down in bedrock cracks and tight areas where small gold nuggets hide.

Setting and Adjustments on the Minelab SDC 2300

One of the other qualities that proves an SDC 2300 to be a valuable metal detector is its ability to reduce ground noise. SDC 2300 has the ‘Enhance/ Fine Gold’ kind of receive processing which minimizes any false detection or signals in highly mineralized soils, thereby proving to be more efficient and less time-consuming for the prospector. Also, the SDC 2300 has automatic ground tracking (measures the ground mineralization) and fast ground balance, allowing the detector to be always properly ground balanced according to the soil.

SDC 2300 also has control of 8 optimum positions, which allows it to be operated in various conditions. The normal mode (from 1-5) is optimized for a varied range of ground conditions. Mostly, it’s used as a default setting. The salt mode (from 1-3) is suitable for saturated mineralized soils, mostly lakes and rivers. If the control is set on higher sensitivity, then there will be more ground noise and interference from the minerals.

is one of the equipments prospectors shouldn’t miss out on due to its ability to handle tough situations and to detect gold in land and underwater.

Unlike other metal detectors, the SDC 2300’s lightness and portability allows it to be carried around in simple backpacks or luggage with ease. While most detectors are rather bulky and cumbersome, the SDC is designed to fold compactly, making it ideal for backpacking into remote goldfields far away from roads.

All of these impressive features have made the SDC 2300 one of the most popular metal detectors on the market today. Its sensitivity and depth on small gold nuggets has made it a popular choice worldwide, and while it is a fairly expensive metal detector, it is still priced considerably less than many of Minelab’s other metal detectors.

And: The Garrett ATX Metal Detector