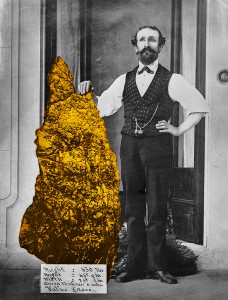 During Australia’s gold rush, finding a big gold nugget was easier than it is today (although it was still not an easy task.) Even in the famous goldfields of Australia, many prospectors had a hard time finding paying concentrations of gold. Thousands of men who intended to get rich returned home with very little to show for their efforts.

Bernardt Otto Holtermann was not one of these men. He had mined for several years with good returns for his effort. Along with his friend and partner Louis Beyers, they operated the Star of Hope Gold Mine.

Located in Tambaroora, near Hill End in New South Wales, this area experienced a gold rush during the 1850’s that attracted several thousand hopeful gold prospectors during its heyday. The Star of Hope Mine was one of the biggest producers in the area.

Small-scale miners worked the surface diggings, but it was the large lode mining operations that really increased the gold production in this area. Rich gold deposits at the Star Hope Mine resulted in many successful years of operations.

It was in October of 1872 that the amazing discovery was made that would come to be one of the most amazing gold finds in history. The mine had started working in an area that was producing some very high-grade gold ore, including some exceptionally rich free-milling gold specimens. Miners working underground tapped into an exceptionally rich vein, and removed the spectacular gold specimen.

The total weight of the piece was recorded to be 630 pounds, or roughly 286 kilograms. It was nearly 5 feet in total length, with an estimated gold content that was believed to be 3000 troy ounces or more.

Holtermann, who had been gold mining for many years, knew what a spectacular and rare find this was. He was proud of the piece; it was truly the discovery of a lifetime.

Despite being the man who operated the mine, Holtermann was just one of several investors and stakeholders involved. He wanted to keep the piece intact, and offered to purchase it for 1000 British pounds over its market value. For unknown reasons, his offer was declined and the amazing specimen was broken down and smelted with other specimens found at the mine.

He eventually resigned from his position at the mine. It was said that he had become disheartened after the destruction of his amazing find. Sadly, during these early days of gold mining, very little value was given to gold specimens like this. They were merely valued for the amount of gold that was contained in them, nothing more.

As impressive as the Holtermann nugget was, it was rumored that the Star of Hope Mine in New South Wales produced several other specimens of gold in quartz that were even larger than the Holtermann nugget. The miners didn’t even bother keep them intact; they were broken apart for easy removal from the mine shafts. No pictures exist to document these finds.

And: The Biggest Solid Gold Nugget ever Found