It is said that New Mexico is home to over 400 ghost towns. The majority of these once glorious towns were mining communities. In the glory days, men lived and died for the riches found in the earth in these places.

Hachita is an old lead, silver, and copper mining town that started to grow in 1875. Within a decade there were about 300 miners living there. While the richness of the nearby mines was nowhere near as large as some of the surrounding mining districts, the town continued to hang on for decades.

Around the start of the new century, a railroad passing nearby revitalized the area and it started to grow as a railroad town. The population peaked around 1920 with about 750 residents, but when the railroad line was shut down in the mid-1930s the town took a fatal blow.

Now you will find about 50 residents living in Hachita, which is now primarily a ranching community now.

Gold was discovered in the Jicarilla Mountains and soon White Oaks were formed. It didn’t take long until the population grew and White Oaks was one of the wildest mining towns in all of New Mexico.

White Oaks has some claim to fame because the infamous ‘Billy the Kid’ and his gang was known to frequent the saloons and gambling halls of town. This was during the heydays of White Oaks, when the population was approaching 2,500 people.

There are only a few people living there today, but there are some nice historic building still in place.

Rosedale is located in the northern end of the San Mateo Mountains. Gold was first discovered there in the winter of 1882. Establishment of the town was delayed a few years by the Apache raids in which many initial miners were massacred and others fled from the area.

The mining town was never very populous, but mining operations were sustained until 1937. Over the years, people moved away leaving it deserted. Now, not much more than the eerie concrete ruins of a mine remain. 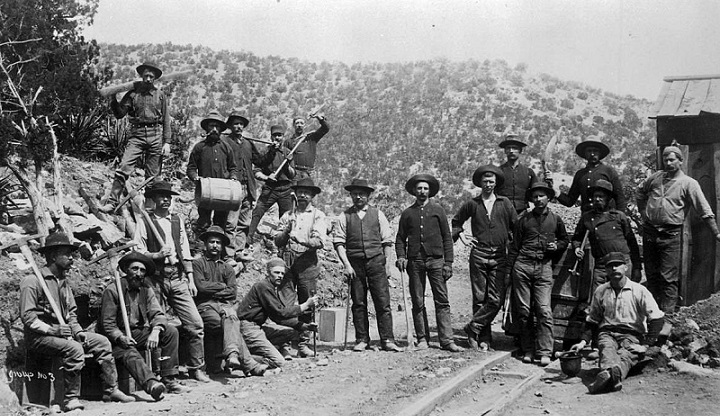 Elizabethtown was founded in 1866 on the high slope of Baldwin Mountain. What remains of this ghost town is located near the Eagle Nest and Red River communities. It is named for the daughter of its founder, Fort Union Captain William H. Moore, who was lead to the area by a wounded Native American whom he saved from dying. In his gratitude, he gave the captain several copper rocks.

Moore and several men set camp on the banks near Willow Creek to mine copper. One of Moore’s men dipped his gold pan in the creek. Bright gold flakes were found in the bottom, and the establishment of Elizabethtown began.

Most of the town was destroyed by fire in 1903; its complete demise came in 1917 with the decline of the mines. Currently, some buildings remain which are being restored. A museum in town contains pictures, documents, and other artifacts about its strange history, which includes a resident serial killer named Charles Kelly.

Founded in 1869, John Barkley Dawson opened the first coal mines in his namesake city. Miners came from China, Greece, Italy, and Mexico to dig coal-enough to fuel an area the size of 1/6 of the United States. Dawson eventually sold the property to Phelps Dodge. By more than a few accounts, the town is believed to be haunted due to the number of deaths caused by disastrous mining incidents.

In October 1913, there was a massive explosion in one of the coal mines, killing 263 miners and 2 rescue workers. Other mines remained open and productive after the accident. Ten years later, in February of 1923, another mine exploded. Among the 123 dead, many were offspring of the men killed in the 1913 explosion. To this day, the ghost town is abandoned for the most part, with the except of the cemetery, which is listed in the National Register of Historic Places.

And: The Lost Padre Gold Mine in New Mexico

Kelly, established in 1883, was a prosperous zinc mining town. It boasts over $21 million worth of zinc mined between 1904 and 1928. The town was bought by Sherwin-Williams Paint because zinc carbonate was a very valuable component in its paint products.

Kelly’s 3,000 residents are long gone, only the mine’s ruins remain among a few ghostly buildings. The mine can be viewed by getting a visitor’s pass at an office down the hill from the structure. 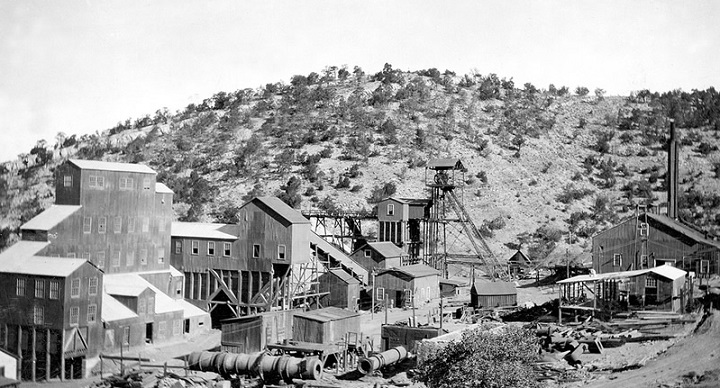 Formerly known as Mexican Springs, this town’s name was changed to Shakespeare in 1879 by Colonel William G. Boyle. Prospectors traveled to the town to mine silver initially, but rumors spread that diamonds were found in Lee’s Peak, a nearby town. The revelation of this hoax led to the name change.

A creepy Shakespeare legend is that the regulation in the town was that, if a resident killed someone (on purpose or by accident), the person had to dig the grave of the deceased. Shakespeare is now a privately owned national historical site. Tours of this ghost town are available to the public.

A piece of ghastly history of this silver mining town was the murder of its founder, Harry Pye, by Apache Indians. In the 1880’s, the town’s most prosperous time period, such attacks were led to get rid of invading miners that plagued the town.

The grim fate of the town came in 1893 when the price of silver plummeted. But in the recent past there has been a real effort to restore, repurpose and revive Chloride, even with only 20 residents.

Lake Valley is a former silver and gold mining town founded in 1876. It was sold to several mine promoters in 1881. Interestingly, the area of the mine that produced the most silver was known as “the bridal chamber”, a macabre name considering it to be in the deepest, darkest part of a mine.

Also of note is that the scary “Longhair Jim” Courtright was sheriff of Lake Valley at one time. He was a feared gunman who was eventually killed in a shootout. Parts of the town site are managed by the U.S. Bureau of Land Management. The buildings may be accessed by visitors with self walking tours during daylight hours.

From bustling mining camps to ghost towns, these amazing ghost towns are in various states of decay today. Nothing lasts forever.

During the height of mining activity these New Mexico ghost towns were bustling communities full of hopeful prospectors trying to strike it rich. Today, most of these places only have a few old building and abandoned mining shafts to show for their existence.

You can still go out into the desert of New Mexico and see some of these amazing places. These ghost towns are an amazing look into a time when the West was still wild.