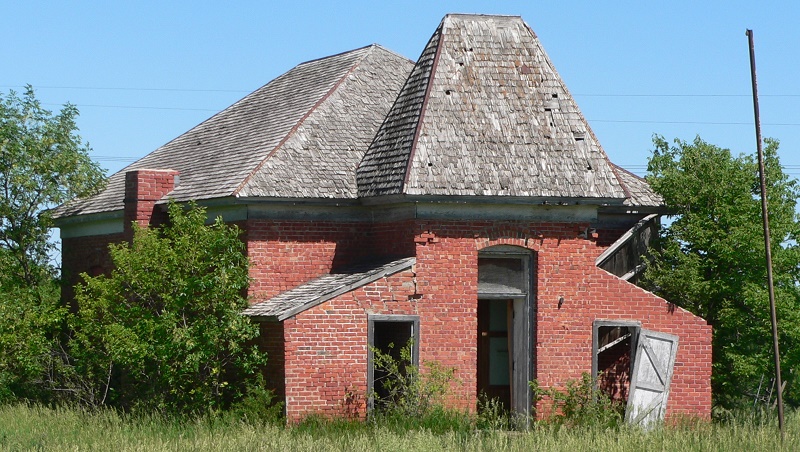 During the 1880s farming exploded across Nebraska bring more and more people to the prairie. With the explosion of people, valuable mineral resources were also discovered in several places.

The explosion of farming, the discovery of minerals and the construction of railroads across the state led to popping up of many towns all over Nebraska.

The decline in minerals near mining towns, change in agricultural practices, bad climatic conditions and lack of government support has led to a decline of most of these Nebraska ghost towns.

Most of these ghost towns, although deserted, still have some of the original structures from 100 years ago. Some of the ghost towns in Nebraska that make for an interesting visit full of history and amazement include:

Antioch is a ghost town located in Sheridan County along Nebraska Highway 2 about 15 miles east of Alliance. In its heydays Antioch was known as the “Potash capital of Nebraska.”

The town was established in 1917 following the construction of five potash producing factories (Western potash, National potash, American Potash, Alliance Potash and Nebraska potash) around the site of the city.

When the World War I began it cut off the importation of cheap potash from Europe to the United States, as a result, there was a need to produce potash locally for local needs. This is what informed the establishment of the factories near the Alkali-rich lakes in Nebraska.

The town then grew rapidly reaching about 5,000 people in population at its peak.

The town was short-lived as in 1921 the government of the United States resumed trade with Germany. This brought in a lot of cheaper potash forcing the factories in the city to close down. The town then began to decline as the population moved elsewhere in search of jobs. Today Antioch has about 25 residents. The town is on the National Register of Historic places and you can visit to learn about potash mining.

Minersville was established in the early 1850s along the Missouri River about 2 miles east of the current site of the Nebraska City Municipal Airport. The town was on the river bank until the Army Corps redirected the Missouri River 1.4 miles to the East.

The town was established following the discovery of coal deposits along the Missouri River in what is now the Otoe County. Initially, the town was named Bennett’s Ferry after John Bennett who ran ferry services across the river. The name was however changed to Otoe City upon the registration of the town in 1856.

Following the discovery of large coal deposits in the area the name was again changed to Minersville in 1874. At its peak, the town had a population of over 1000 people and all manner of businesses.

The town began to decline following the frequent caving in of major coal mines and the poor quality of coal at the time which forced many of the miners to move to other towns. In 1923 the post office was closed down. Today the town is made up of an uninhabited residential area, a cemetery, and an intact downtown coal shafts.

Ames is located in Dodge County along the U.S. Route 30 to the west of Fremont City. Ames was established in the 1880s as a shipping point on the great Union Pacific Railroad. The town flourished in its early years with a rail station, a post office, a school house, churches and many other businesses. It had a population of more than 1000 people and was very busy.

With the decline of rail transport in the United States, the town begun to decline with most of its residents moving to other areas in search of greener pastures. Today the town is another of the Nebraska ghost town with many of its early structures still intact. A few families still live here but most of the businesses are now closed.

This is another important ghost town that you can visit in the Sarpy County. The town was established in the 1850s when the lime kiln was constructed. At its peak, the Line-kiln provided employment to over 400 men. The town also boasted of a population of over 800 people with saloons, restaurants, general stores and a host of other businesses.

When the lime Kiln era in the United States ended most of the towns that depended on lime kiln declined. Today the Dyson Hollow Lime Kiln is no more. People traveling on the Dyson Hollow road southeast of Omaha and to the south of the Platteview Road can still see the ruins of the kiln and a number of other damaged structures.

And: 6 Fascinating Ghost Towns in Kansas to Visit

And: 6 South Dakota Ghost Towns Abandoned by the Gold Miners

Belmont is located in Dames County about 11 miles southeast of Crawford. The town was established in 1889 following the construction of the Belmont Tunnel. The town was initially known as the Evergreen City.

Following changes in transportation that saw nearby farmers acquire truck that they could drive to larger towns to sell their farm produce Belmont begun to decline. Eventually, the Burlington railroad stopped the passenger service to Belmont in 1969. This marked the end of the Belmont town. Today most of the rail and office building still remains and a few homes although most of the early inhabitants moved off to other towns.