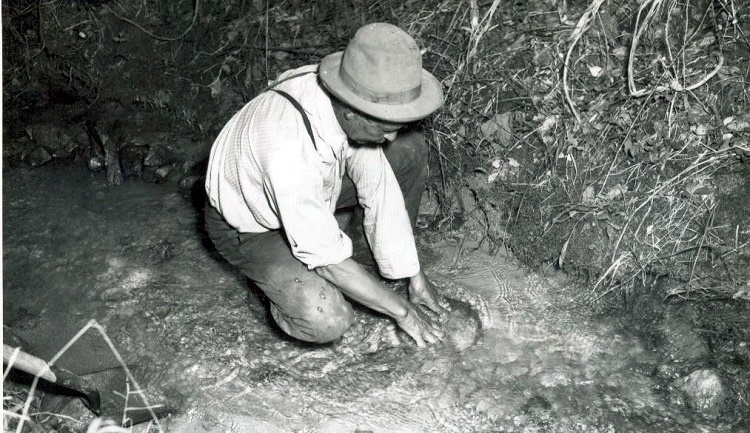 A Georgia gold miner pans some gravels in search of gold.

The largest gold producing state in the eastern United States was Georgia.

The celebrated county seat of Dahlonega in Lumpkin County was the center of the original gold strike in Georgia. For a time, this part of Georgia was getting more attention from gold miners than anywhere in the entire world. Miners scoured the rivers and creeks of Georgia in search of riches. The United States Mint even set up a branch in Dahlonega for several years.

Gold that is mined in Georgia often assays at well above 23 karats, some of the purest natural gold deposits found anywhere on earth. As with other southeastern states, gold here can be found in both lode and placer deposits.

There are 8 major rivers in Georgia where gold has been mined. With careful gold panning you can still recover hidden gold deposits within the gravels.

Southeast of Ball Ground on the Etowah River were numerous area prospects and mines in exposures of decomposed bedrock. This is a likely source of some of the gold found in the river. 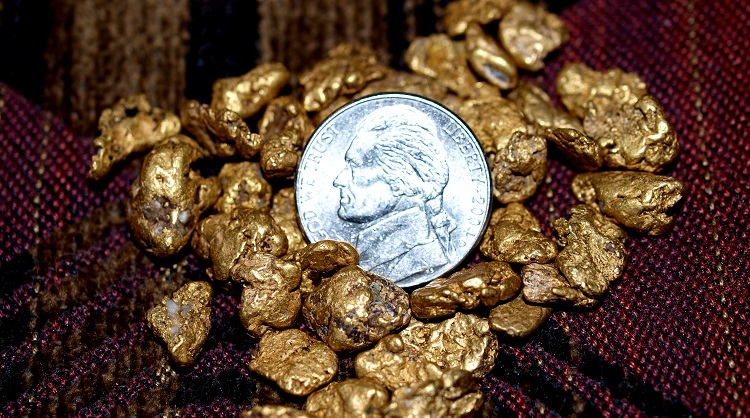 Many old placer mining operations took place around the town of Thomson in McDuffie County. Northwest of the town you can find gold by panning along the banks of the Little River.

And: The 8 Best States to go Gold Panning in the East

Numerous rich placer gold mining sites were situated along the creeks draining into the Chattahoochee River near Gainsville. This is in the heart of Georgia’s gold country, and just about any creek or gulch in this area has potential to produce some gold.

Sections of this creek were mined by hydraulic mining and many large nuggets were said to have been recovered here, suggesting that a metal detector may be good to use here 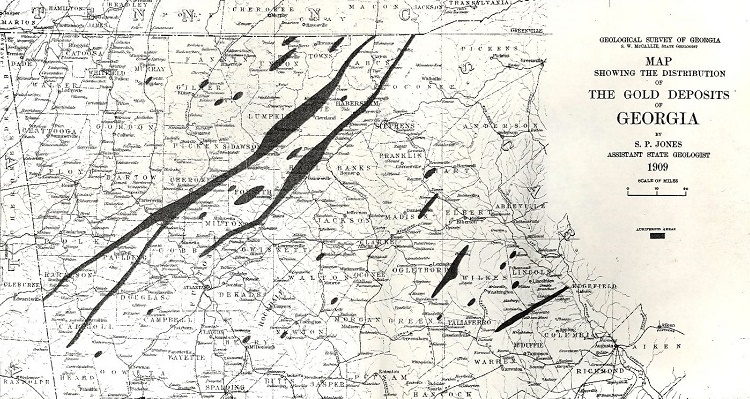 The areas in dark blue represent the parts of Georgia with the highest concentrations of gold.

A lot of gold has been mined from the Tallapoosa River in Alabama, but the upper sections of the river also have gold. All of the waters in Haralson County are worth prospecting with a gold pan

. The Owens Mine in Haralson County was one of the major gold producers in this part of Georgia.

The Chestatee River had numerous mines along its banks during the height of the Georgia Gold Rush, with rich placer gold deposits found throughout. This is still a good place to prospect for gold.

The Tesnatee River was also a respectable producer of gold. There are other tributaries of the Tesnatee River that carry significant quantities of gold as well, and the entire area around Dahlonega is probably the best-known gold region east of the Mississippi River.

The Nacoochee River has some good sections where you can find gold, particularly in Whites County. This area was a major gold producer at one time, and the river still holds some hidden gold.