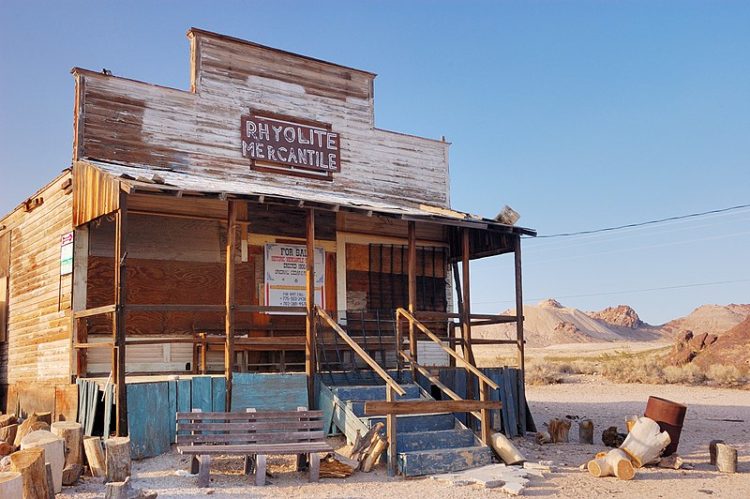 Some towns survived the gold rush; other towns were not so lucky. When the gold disappeared, the people did the same, and without people a city has no life.

That said, the inevitable death of the town does not take away the time it shone with hope and greed as gold flowed, like the memory of a shooting star. This is what happened to Rhyolite.

Rhyolite is a ghost town in the Nye County, in the U.S. state of Nevada. The name of the town comes from rhyolite, an igneous rock composed of light-colored silicates. It is situated in the Bullfrog Hills, about 120 miles northwest of Las Vegas, close to the eastern edge of the Death Valley.

So, how did all start? Well, it began when two prospectors, Cross and Harris, found gold on the south side of a southwestern Nevada hill on August 9, 1904. The place which would later be named Bullfrog Mountain.

News of the discovery quickly spread, and in those times news of gold translated in lots of people. Thousands of prospectors and speculators rushed to what became known as the Bullfrog Mining District, hungry for gold.

Rhyolite was popular choice to settle. Its privileged location made it an obvious choice. It was situated in a sheltered desert basin close to the region’s biggest mine, the Montgomery Shoshone Mine.

With such influx of settlers, Rhyolite quickly became the largest mining settlement in the area. Rhyolite became a town of 1,200 people in two weeks and reached a population of 2,500 by June 1905. According to old records, in February 1905 the mine was producing ores valued in $16,000 a ton, equivalent to $426,000 a ton in 2016. However, it is important to understand that getting accurate numbers from this era is very challenging and most are just estimations.

Also Read: 4 Ways You Can Find Gold in the Desert

And: 15 Metal Detectors that Will Find Gold Nuggets 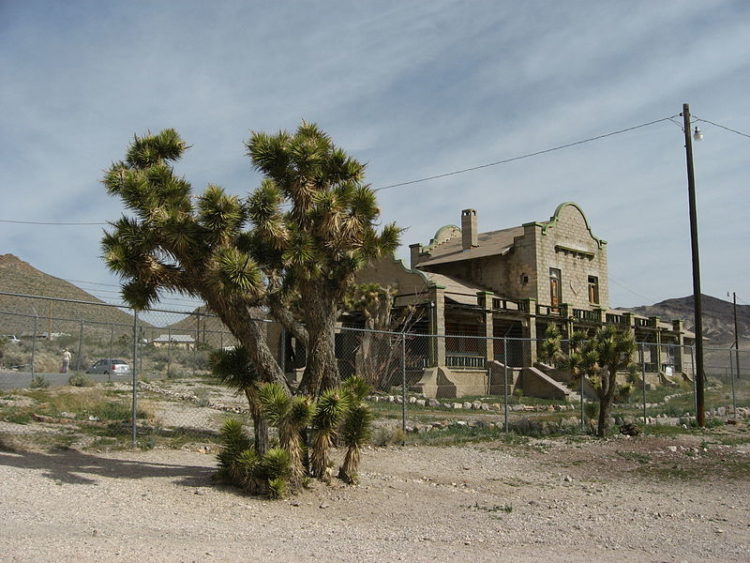 The original owner of the mine, Ernest Alexander “Bob” Montgomery, and his partners sold the mine to industrialist Charles M. Schwab in February 1906. Saying that Schwab rebuilt Rhyolite, it is not an exaggeration. In fact, I would go as far as to say that he was also an architect, or secretly desired to be one.

With his help, Rhyolite expanded the operation on a grand scale, hiring workers, expanding the infrastructure, opening new tunnels and drifts, and building a huge mill to process the ore. And he did not stop there. He went ahead and helped expand the town with schools, railroads, an opera house, churches, newspapers, police and fire departments, and so much more.

He transformed Rhyolite from simple mining town to a prosperous settlement filled with commodities usually expected from cities. 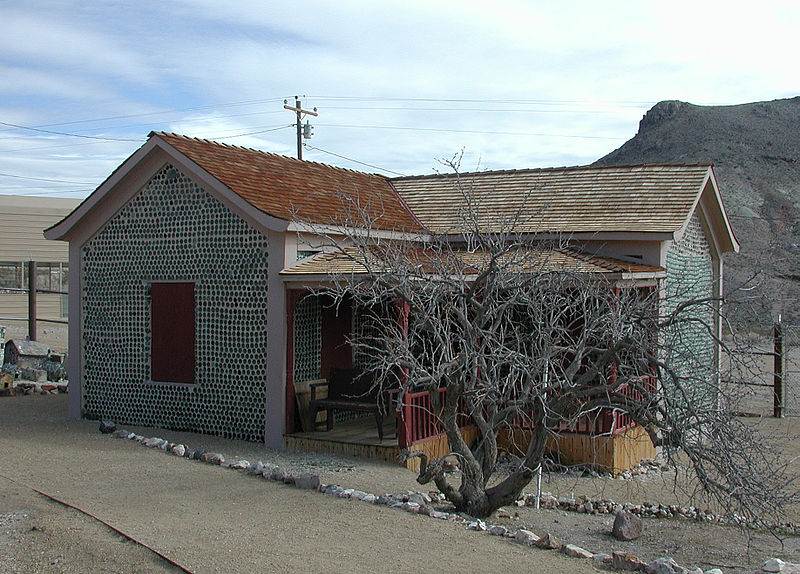 Although the mine produced much gold in its first three years, its value started to fall after that as production began to go down. A committee of minority stockholders had the suspicion that the mine was not as rich as they were led to believe. They needed to be sure, and so, in February 1908, they hired a British mining engineer to inspect the mine. To their dismay, the engineer’s report was not very favorable, and to make matters worse, the news of this revelation caused a steep decline in share value.

The mine remained profitable till 1909, from then on, no new ore was being discovered. Finally in March of 1911, the mine had to be closed.

However, the decline of Rhyolite had already begun before the mine spat its last gold nugget. Around the same time that gold was running out from the Bullfrog mines, the 1906 San Francisco earthquake happened. It diverted much-needed capital to California and interrupted rail service.

Then as if that was not enough, there was a financial panic in 1907. Let’s just say that there wasn’t much funding left for the mines after that. Rhyolite was doomed.

And: The Rise and Fall of Tonopah, Nevada

And: The Lost Sheepherder Mine of Jarbidge, Nevada

As mines in the district reduced production or closed, unemployed miners left Rhyolite to seek work elsewhere in Nevada and throughout the West. The fate of the town was sealed. Within a year the town was practically abandoned, with only a few residents left.

As the last act of indignity, a lot of Rhyolite’s remaining infrastructure became a source of building materials for other towns and mining camps. Only one serious mining operation was ever opened in the area again, but it lasted as much as the previous ones, which wasn’t much, and it never landed as much gold.

As it was said in the beginning Rhyolite nowadays is truly a ghost town. Only the skeleton of the town remains, with few scars on the landscape. However, those that shined bright don’t give up so quickly, and the memory of Rhyolite is alive and well.

The Rhyolite historic townsite, maintained by the Bureau of Land Management, is one of the most photographed ghost towns in the West, and the town has appeared in many films. Rhyolite may no longer exist in the physical world, but it is alive and well in our imaginations.

Next: Southern Nevada Gold Mining – Explore the Desert around Searchlight