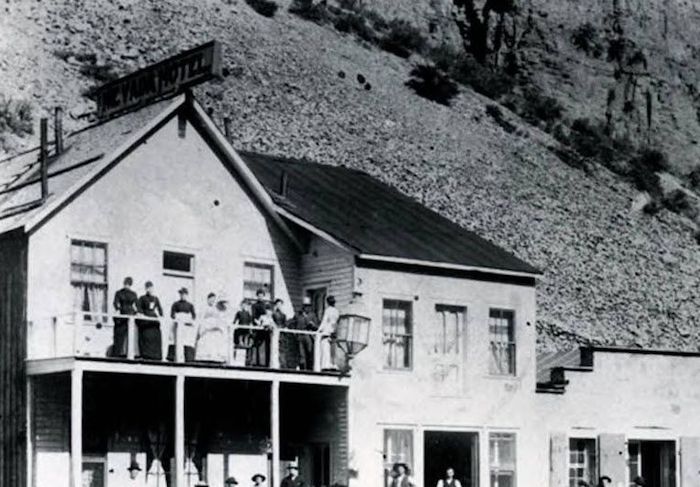 Bayhorse was once a bustling mining center that attracted hundreds of mining and boasted of a number of important silver mines. It is estimated that the total production in the Bayhorse area amounted to over 6.3 million oz. of silver, 37 million lb. of lead, 6.6 million lb. of copper, 39 thousand lb. of zinc and 200 oz. of gold.

It was a rather insignificant discovery of gold that first brought miners to this area. As the gold played out, the silver ores were discovered.

Gold was discovered in the area in 1864 along the Salmon River by a miner passing through. A few miners set up camp to prospect these placer deposits. Like much of the Salmon River, there was indeed gold there, but it wasn’t particularly rich.

Prospectors continued to search new areas and moved their way up Bayhorse Creek.

Silver was discovered in the area in the early 1870s and by 1873 the first silver lode claim was registered. The fortunes of the area begun to change in 1877 when one of the richest lead-silver veins in Idaho was discovered nearby. This discovery led to the establishment of the Ramshorn Mine which in turn sparked off a major silver rush to the area bring in hundreds of miners.

By 1878 several other silver mines including the Beardsley Mine had been established and silver production began in earnest. This led to the birth of the town of Bayhorse which became an important center for the mining activities in the region.

And: Gold Mining in Warren, Idaho

Kilns and Smelters at Bayhorse

Due to increased production in the area, a 30-ton smelter was built in 1880 to process the ore being mined in the nearby mines. With the construction of the smelter, several charcoal kilns also sprung up in an effort to supply the smelter with the much need fuel for smelting. This further brought in more workers and the town of Bayhorse expanded quickly to reach a population of over 300 people and had many business and permanent building. 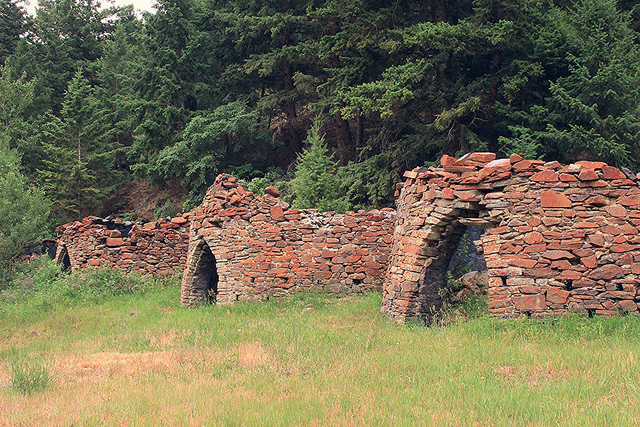 In 1883, the Ramshorn mine built an aerial tramway to transport its ore to the wagons leading to the smelter. This increased productivity in the mines making the period between 1883 and 1889 the most productive years in Bayhorse. The ore began to run out in the late 1880s and by 1889 production had declined greatly forcing the smelter to be closed down. This did not last long as it was reopened in 1893 and was operational until 1897 when to was closed down for the last time. The smelter was later dismantled.

The closing of the smelter did not end silver mining in the Bayhorse area, but it did contribute significantly to the decline in production. Several mines in the area continued with their production until 1925 when the last mine closed down. During this time the ore was transported to Clayton for smelting.

There several efforts to revive mining in the area but not come to fruition. The most notable is in 1951 when a mill was constructed on the old town site and production revived but this last for only a few years.

In 1976, the old Bayhorse town was listed in the National Register of Historic Places due to its historic significance in relation to silver mining in Idaho. However, the town and the neighboring properties remained in the hands of private owners.

In 2006 the Idaho Department of Parks and Recreation (Parks) bought the townsite and several mines adding it to the Yankee Fork State Park. The properties bought for this purposes included the Ramshorn Mine, the Beardsley-Excelsior Mine, the Pacific Mine, the Skylark Mine, the Bayhorse townsite and the smelter and the mill sites. This made up about 500 acres that were added to the park.

The townsite still has several original structures still in place. These include the Bayhorse Saloon building, the mill, the Wells Fargo stone building, the beehive kilns and several wood cabins. The Department of Parks has embarked on a process of restoring and preserving several important historic features in the Bayhorse area for recreational and educational use by the citizens of Idaho.

Already the Pacific Mine, the Ramshorn Mine, the Beardsley Mine, the Skylark Mine and the townsite have been cleaned up and are open for public use. While visiting Bayhorse you will learn about the early methods used to mine silver and the other minerals in the area.

The department has also been working closely with the Idaho State Historic Preservation Office to collect, restore and preserve other relics from the area.

Next: Mining in Warren, Idaho and the Salmon River