When you think of Maine most people think of rugged coastlines, historic towns, delicious lobster, vast wilderness, and early colonial history. Besides the lobster all these attributes have a common denominator — potential for hidden treasures.

Metal detecting in Maine is a very popular hobby, and with research and perseverance you can find a variety of coins, relics, and possibly even a buried treasure. Let’s take a look at the early history of the state for a few ideas…

Native Americans, known as the Wabanaki, were the original settlers of this appealing land. First European contact was made by the Norwegians dating back to 13th century, though, it would be another 400 years before a wave of French, Spanish and English explorers would come to settle the new land by setting up trading post throughout the region.

With so many influential nations jostling for supremacy of trading rights, the new land was becoming ever so complicated. As the lucrative new colonies were expanding, so were the threats of attacks from restless natives. This included hostilities amongst the new arriving European countries as well.

Clashes were commonplace in the early years of settlement life and over the next 100 years. The pieces would fall into place as British power final took hold throughout most of New England, thus leading colonist into the Revolutionary War.

With all this turmoil during such an unsettled time in American history, there is no doubt that many settlers buried their belongings to keep them safe from all this unrest. Buried caches can be found around old homes and settlements. The challenge is finding them today since very little will remain to show their existence, but metal detecting Maine has the potential of uncovering this type of treasure.

Some of the best and most productive prospecting excursions can be had by metal detecting Maine’s lost towns of the past. These ghost towns are full of true life history and its right there under your feet. All you have to do is dig it up!

Maine is no exception to the rule by offering a plethora of history and lost towns. Today some of these towns listed might be difficult to reach, though with the proper equipment and mode of transportation anything is possible. 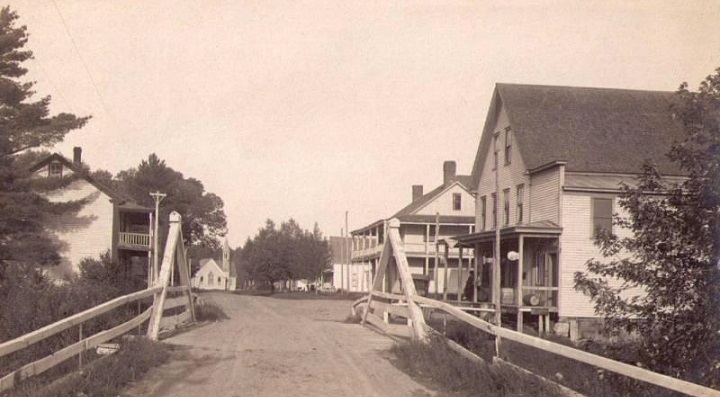 Flagstaff, Maine. Prior to being flooded by Flagstaff Lake on the Dead River.

Here are just a few:

Dead River – after being flooded out by the Central Maine Power Co. nothing remains exception to a few roads leading to the edge of the of Flagstaff Lake and the outskirts of this these submerged ghost town.

Flagstaff – once the abode to Benedict Arnold in route to his attempts to take Quebec. This ghost town may deliver the goods if one can research the finer points on where to begin. Flagstaff was partially flooded while portions of the town are still obtainable by land. Be warned of the Flagstaff ghost who apparently never left his home after the town had been flooded out.

Riceville – this old ghost town was a thriving tannery in its heyday. Relics scatter the landscape as you may not even need a metal detector to discover the riches of history. This location has been abandoned since the early 1900s and eagerly awaits new visitors to discover her treasures.

There are literally hundreds if not thousands of towns, logging camps, and small settlements from centuries ago that are long gone today. Perhaps just a few buildings in total, these places can still contain a considerable amount of treasure.

With over 300 of years of rich history flowing through her veins, Maine is a treasure trove of riches waiting to be unearthed. Dust off the metal detector and get your research laid out! We’ll help guide you to some of Maine’s hidden caches, old coins, and relics of a bygone era. With some much coastal beaches, hidden islands, rivers, and historic ghost towns Maine is sure to deliver epic finds of historical importance to any prospectors’ collection.

As the story goes, in 1849, father and son were logging along the banks of the Bagaduce River near the small town of Penobscout. The son trudging logs through the autumn quagmire of the riverbank spotted a faint shimmering object amongst the sludge and debris. Discovering that it was a 200 year old French coin he feverishly made his way to his father’s side as they both quickly realized — the legend of Baron de St. Castin’s hidden treasure!

Winter freeze would set in before the two men could resume their search that following spring. After the spring thaw the two were back again with shovel, pick and axe excavating the riverbank seeking more treasure. Later in the year when the search was finished they had discovered over 2,000 Spanish, Portuguese, French, and Dutch
gold coins in total.

It’s believed that Baron de St. Castin had buried his cache of gold coins 200 years earlier in a metal box along the Bagaduce River in a fury to escape prosecution from authorities though never able to return and collect his treasure. Legend states that the metal box is still lurking in the riverbank still waiting for some lucky person to discover it.

If two gentleman from the 19th century could find 2,000 gold coins, just think what you might find while metal detecting Maine. There is always the possibility of making a find like this.

And: Placer Gold Occurrences in Maine

Pirate treasure would be considered the Holy Grail to all prospectors out there. Oh boy, the story one could tell if only! Well dreams can come true at Deer Island with over a million dollars in booty resurrected from the island’s sandy beaches.

Jewel Island is another place that treasure hunters seek fortune here as they try to discover more of Captain Kidd’s treasure.

The shores of Maine are littered with countless shipwrecks all along the coastline. The rough waters make searching difficult, and many of these ancient shipwrecks are undocumented and have never been discovered.

From time to time a treasure hunter will find a relic or coin on the beach sands that washes ashore. One can only surmise that considerably more treasure is out there waiting to be discovered, especially considering the amount of piracy that occurred centuries ago. 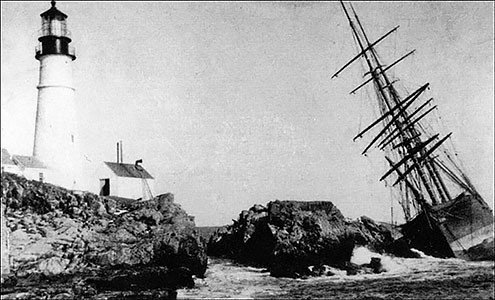 Countless Opportunities for the Treasure Seeker

The state attracts tens of thousands of outdoor fanatics throughout the year for reasons to be discovered by those who come. However, for a select few of us treasure hunters, Maine opens up a trove of prospecting options that will leave you hankering for another day out on the prowl.

Maine with so much early colonial history, settlements in strife, beaches, ghost towns and legends of hidden treasures makes it a fantastic place to hunt with a metal detector. There is an abundance of old coins and relics still buried and waiting to be unearthed. Metal detecting in Maine hold great potential for the treasure hunter.

Treasure awaits those who seek it!

Next: Where to Pan for Gold in New Hampshire