There has been gold found in nearly every part of the state of Idaho. Some of the major rivers have seen a considerable amount of mining over the years.

During the 1860’s, miners were exploring every river and stream in the state in search of rich gold deposits. And they found a lot of gold.

These rivers still have lots of gold today. 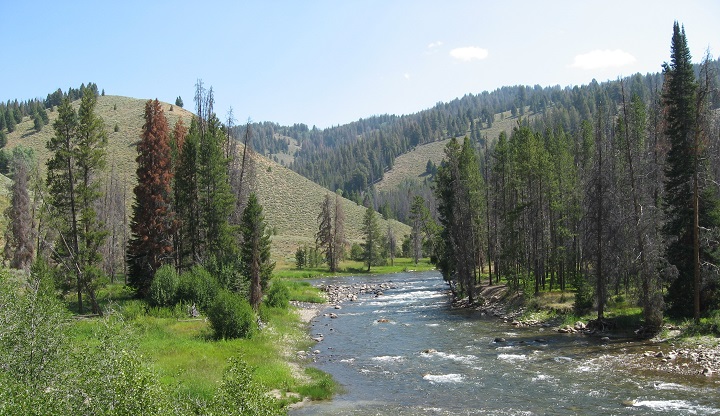 Much of the river has been placer mined downstream of Atlanta. Several abandoned mining towns existed along this part of the river for many years during the late 1800s. A considerable amount of gold was found here.

The Salmon River drains a huge part of central Idaho, with countless gold-bearing tributaries that flow into it.

You can do some gold panning just about anywhere along the Salmon River and you have a good chance of finding some gold. Often it is very fine textured, but there have been some nice gold nuggets recovered in parts of the river as well.

Large mining operations have recovered lots of gold near Riggins. Some large dredging operations have been productive here over the years. Historically there were miners working all along this river. Just keep in mind that large stretches of the Salmon River are within wilderness now and are completely off-limits to mining.

The Payette River has some parts that have almost no gold present, but if you know where to go there are some very rich placer deposits.

The richest part of the Payette River is near Banks and Garden Valley. Some of the drainages that are part of the famous Boise Basin flow into the South Fork, particularly Alder Creek and tributaries in this area.

There is still very good gold in the South Fork of the Payette River, but parts of the river flow in a very steep canyon and access is very challenging.

One notable mining town here is Pierce, Idaho. It is the site of Idaho’s first gold discovery and the gold strike was found on a tributary to the Clearwater River.

This is a tributary to the Clearwater River near the town of Elk City. Gold was first discovered here in 1861, and considerable mining has taken place here. There are miles of the Red River that were mined with bucket line dredges.

The American River is another tributary to the Clearwater River located near Elk City. There is very good gold to be found in this river. Historic mining was done all throughout the river system with miles of dredge tailing evident to show for it.

There are lots of hard rock mines in the area around Elk City that feed the placers of the American River.

It is interesting to note that the longest river in Idaho, the Snake River, is believed to have more gold than any other river in the entire state of Idaho. Many geologist have surmised this to be true, yet almost no commercial mining has been done along the Snake River.

Historic mining took place in a few locations during the early days near Milner Dam in southern Idaho, and small-scale placer miners worked the gravels all throughout the river.

The reason for the limited mining is the fact that gold is extremely fine textured and so widely dispersed that it has been nearly impossible to mine them commercially for a profit. Some of the gravel pits along the Snake River have mined for gold along the Snake, but the gold value was simply a by-product of the existing gravel operations. Mines specifically targeting gold have been short-lived.

Prospectors in Idaho are lucky to have so many areas that they can search for gold. Most of the rivers in northern and central Idaho have at least some gold, but the rivers listed above are all well-documented as being very rich.

Keep in mind, some of these Idaho Rivers are several hundred miles long, especially when you consider the different forks and tributaries, and the gold isn’t evenly distributed. There are certain pockets where much more gold is found than others.

Doing research to locate the historic mining towns and specific locations where gold was found by the old-timers will always pay off in more gold.

Next: 19 of the Richest Gold Mining Towns in Idaho (Map)