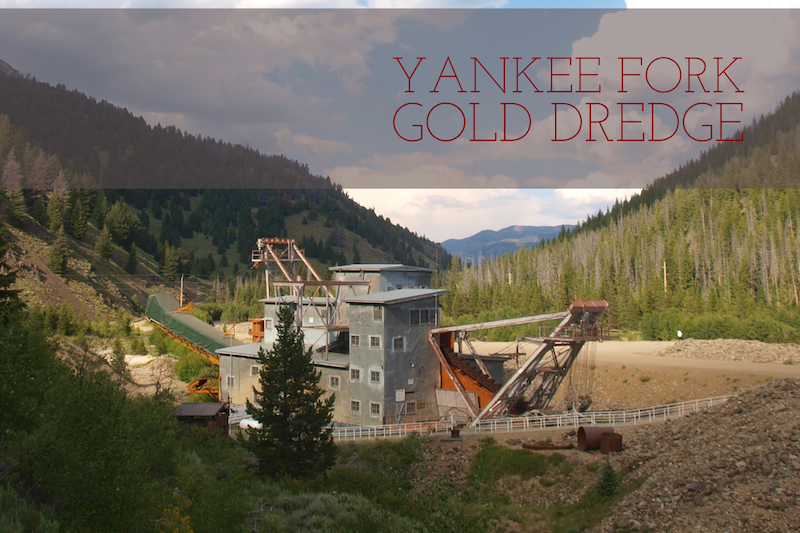 The Yankee Fork Gold Dredge is one of the best historical gold dredges in existence today and definitely worth a visit. The structure has been well persevered and restored to the original state meaning that you will see firsthand how the machine was in 1950.

It is located just outside of the vast River of No Return Wilderness in the central Idaho Mountains along the Yankee Fork, which drains into the Salmon River. It is about 22 miles from the town of Stanley which is by far the nearest decent-sized town to the dredge. If you are traveling from Stanley, follow highway 75 east. At about 13 miles from Stanley, you will reach Sunbeam, turn north along the Yankee Fork River. The Dredge is located about ten miles along the road.

The history of the Yankee Fork Gold Dredge goes back to 1939 when the Silas Mason Company based in New York started seeking for investments opportunities in Idaho. The company got wind of the presence of gold in the Yankee Fork Valley and sent a team to survey the area. The team reported back to the company that the valley had gold estimated to be about 11 million dollars in value.

The company acquired a five and a half mile claim in the valley bottom and commissioned Erier Bucyrus to design and build a dredge for gold mining.

The construction works for the dredge begun in April 1940. Given the remoteness of the location, the company spent quite a great deal of money ferrying the materials from Milwaukee using the railway to nearby Mackay before using trucks to transport the materials into the Yankee Fork Valley.

The superstructure and the pontoons were all assembled in Boise and transported to the site using trucks. The construction took for months and by mid-August 1940, the Yankee Fork Gold Dredge was commissioned. At its completion, the dredge was 64ft high, 112 ft long and 54ft wide. Its weight was over 988 tons. The dredge was powered by two heavy duty 350 HP diesel engines.

The Dredge in Operation

The dredge worked for 12 years between 1940 and 1952 which a short break for a few years during the Second World War. In 1947 the Silas Mason Company decided the dredge for not producing enough gold. The dredge was finally bought in 1949 by Fred Baumhoff and J.R. Simplot for $75,000.

In 1952 the new owners of the dredge had exhausted the original claim and leased a small section of the surrounding land from the Morrison’s. However, seeing no prospect for more productivity they closed shop as soon as the new section was completely dredged.

In 1953, the Morrison’s asked them to move the dredge or pay rent for the land where it sat. The dredge was then started for the last time and moved to its current location which is within the original claim.

All in all, the Yankee Fork Gold Dredge churned up about 6 miles of the river bottom and extracted several million dollars worth of gold. Other mining activity occurred in nearby lode mines at Custer and Bonanza, but most of the production from this mining district resulted from the dredging activity.

The dredge remained unattended to for 13 years from 1953 to 1966 when J.R. Simplot finally donated it to the United States Forest Service. The Yankee Fork Gold Dredge was converted into a tourist attraction where you can come and learn about the history of gold mining in Idaho.

The Yankee Fork Gold Dredge association began offering both guided and self-guiding tours to the dredge in 1980. The association has volunteers who take visitors through the dredge explain the process of gold mining and giving a brief history of the dredge.

In addition, visitors can visit the kiosks at the site to see pictures of the dredge through the years from the day it was built to the present. This is a great opportunity to learn the history of the dredge and see who actually it used to work. The kiosks also contains pictures of the men who worked at the dredge and their families who all used to live in a camp nearby. This section offers a glimpse into the life at the camp in the 1940s through to 1950s when the dredge was still in operation.

The Yankee Fork Gold Dredge association even runs a gift shop inside the dredge where you can buy some fun memorabilia for your trip to the dredge. This is an impressive piece of equipment and a wonderful relic to visit and enjoy.

Next: Bayhorse, Idaho – One of the Finest Old Mining Towns in the State