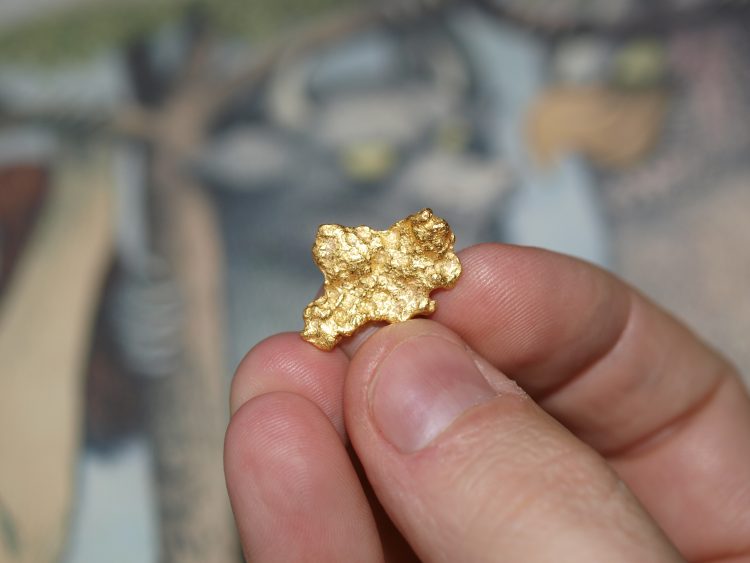 It took me 2 years to find my first gold nugget.

That might seem crazy to most people, but most prospectors know just how elusive those little buggers can be.

Now I had certainly found gold before. Growing up just a short distance from a well-known mining town in Idaho, it wasn’t too tough to find a little gold dust using a gold pan. A short 30-minute drive would put me in gold country, and with a little effort you could get a few specks of gold.

A sluice box worked a lot better for finding more gold, but it was still all fine dust. Once in a while I would find a little “picker” in the head of the box, but for the most part all the gold was small stuff.

I Needed a New Metal Detector

I realized pretty quickly that the guys who were finding the big nuggets were using metal detectors.

Now as the time I was also interested in coins and relics too. I had an Garrett ACE 250 which is a fine beginner coin detector, but it struggled in the gold country. I knew better than to try using it in that hot mineralized soil.

With a bit of research I decided that I needed to upgrade my choice of metal detector. I figured there had to be a good detector that I could use for coin hunting that would still work for gold nuggets, and indeed their was. I picked up a brand new White’s MXT

Now the White’s MXT was a good choice for me because it was designed to operate in 3 different modes, depending on the type of detecting I was doing. Most importantly it had the trusty “prospecting” mode, so I figured I was all set.

In hindsight, there were definitely better choices than the MXT, but I didn’t have a lot of money back then and I liked the idea of having one detector that could do everything.

Head for the Goldfields

Equipped with my new tool, I was ready to hit the goldfields and start popping big nuggets out of the ground!

First I went to the Boise Basin in Idaho. This is a famous gold mining area with miles of dredge tailings. I thought surely I would find my fortune there.

After a few trips I had found some interesting old relics in those dredge tailings, but not a single nugget. In fact some areas were so loaded with trash that it was hard to hunt.

Some places were also covered with lots of dirt, pine needles, and other duff. My detector could hardly punch down through all that stuff. It seemed like a metal detector wasn’t going to work very well there.

I decided that the Boise Basin must be played out. So I loaded up the truck and headed for Rye Patch in Pershing County, Nevada.

Rye Patch is a famous mining district first discovered in the 1930s. The nice thing about Northern Nevada is that its relatively shallow ground. Most of the nuggets there are within a foot of the surface of the ground, so metal detectors are the perfect tool here.

The downside is that Rye Patch has been hammered hard for years, long before I ever started metal detecting. I spent a few days swinging my MXT out there, but I didn’t find much. Even trash was hard to find. I decided that this area was played out too.

On my quest for that elusive nugget, I finally headed for the Blue Mountains of Eastern Oregon. This area has plenty of gold, and I thought surely there would be one with my name on it.

I didn’t have luck at first. I explored a lot of different areas but kept running into difficulties. Private lands and mining claims had me frustrated. At the time I didn’t know how to research active and abandoned mining claims, so I had trouble finding a place to go.

Finally I stumbled across an isolated little gulley in a little-known mining district. There were some old hard rock mines on the mountain above, and I could see some tell-tale signs of placer diggings in the dry creek bed below.

I fired up my metal detector and wouldn’t you know it… more trash!

I was determined. I kept digging and digging, and although I was certainly getting discouraged I knew that sooner or later I had to find some gold. It just had to happen!

And finally it did. I heard a subtle signal with my detector. I scraped away an inch of pine needles and dirt and swung my coil over that spot again. Now I had a nice, booming target.

Dig, dig, dig. I get the target out of the hole. Just a clod of dirt, I swing it over the coil and get a nice sound. Now the target’s in my hand, so I bust apart the clay and dirt in my hand, and wouldn’t you know it… GOLD!

It was a nice piece, maybe 2 grams or so. I just sat there in awe looking at that piece of gold. I had hunted 3 different states and spent so many long days digging junk for it. It was a prize that I will keep forever.

I’ve found quite a few more nuggets since that first one, and I have realized that I certainly did some things right, but I made some mistakes too.

Now there’s nothing wrong with hunting new areas and trying to find better prospecting ground, but I was getting discouraged way too easily. A lack of confidence was making me believe that my spots sucked, and I needed to try completely new areas.

There was (and still is) plenty of gold in those places. I have since been back and found a lot of gold there, but at the time I had almost zero confidence, and it effected my success.

I did make a good choice by getting a gold detector that was capable in the goldfields. I wouldn’t consider the MXT to be the best gold detector by any stretch. It lacks the sensitivity of some other respected gold detectors, but it was certainly capable of doing the task.

(If you use an MXT for gold hunting, I recommend getting the 4×6″ Eclipse “Shooter” DD Coil

Wrong: Getting Discouraged by Trash

Finding junk with your metal detector can be super frustrating. It can be easy for a prospector to get lazy and “selective” about the targets that they dig. Some of the spots I was hunting were so trashy that I just didn’t think it was possible to find a nugget there. I figured I’d have to dig 1000 pieces of trash before I got lucky enough to find a nugget.

It can be frustrating to dig trash, but I have learned that there’s no good way around it. Sometimes I will admit that I will use discrimination on my detector to try and reduce some of the trash targets, but most of the time you just have to dig it all. Learn to embrace that junk and know that every piece you dig is once piece closer to the next nugget.

Right: I Didn’t Give Up!

Ultimately, the most important thing that I got right was to not give up. I had friends who were finding gold nuggets, so I knew they were out there. I was starting to get frustrated, but also a little bit pissed off!

It fueled me to keep after it and not give up. I kept researching about different mining areas, trying new places, and hunting hard. It eventually paid off.

What to Do if You Can’t Find a Gold Nugget

If you’re a gold prospector and you are still struggling to find your first gold nugget with a metal detector, I can assure you that you’re not alone.

My story above is pretty similar to a lot of other prospectors. I’ve talked with enough to know that pretty much everyone had a similar experience.

The challenges of finding a good mining area, learning to use a metal detector, along with the rarity of gold nuggets makes it tough. It is very common for people to spend a year or two, just like I did, before they find a gold nugget.

Just remember, gold is valuable for a reason. It is super rare! And nuggets are even rarer. Finding one with a metal detector is a real challenge, much more difficult than hunting for coins at the park.

The excitement of actually finding one is unlike anything though. If you are still hunting hard for that first nugget, keep at it. It will come when you least expect it!