Just like its other surrounding states, Indiana has small quantities gold that were left behind by glacial deposits several thousands of years ago. Although not commercially viable, there is more than enough gold to satisfy the interest of “weekend warriors” and serious prospectors alike.

There are no recorded commercial gold mining operations in Indiana. Thus, official reports of gold production are also quite limited. However, there are several prospectors in Indiana that are successfully finding good quantities of gold.

There are no natural gold bearing veins or natural placer believed to be in Indiana.

Whatever amount of gold that is produced in the state is likely traced back to the glacial deposits that transported gold down from the gold deposits in Ontario, Canada.

Brown County has produced quite a significant amount of gold for recreational gold prospectors along its shallow streams and creek beds. Salt Creek was specifically noted for having some appreciable glacial gold contents in its gravel bars and also in the gravels directly above the shale bedrock.

Small nuggets and pickers can be found in the cracks and crevices in the bedrock. The creek is a very popular location for gold prospecting in Indiana. It is made up of tributaries flowing from Sweetwater Lake and northern Brown County. 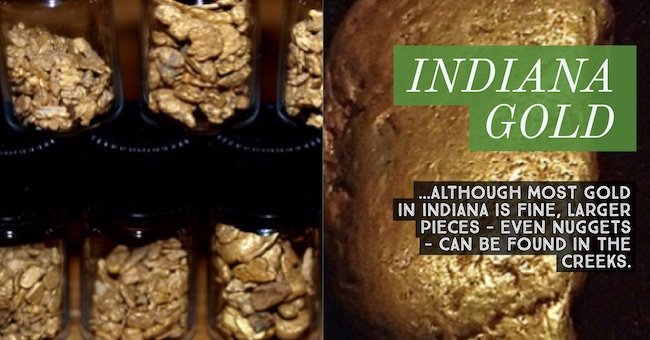 Monroe County is also dotted with several creeks that have glacial gold deposits. Among these watercourses in the county are the Sycamore Creek, where the gold is very fine and the highest of quality usually comes out of the gravel in the banks; Indian Creek and Gold Creek.

And: Prospecting for Glacial Gold in the US – Locating Ancient Outwash Areas

Morgan County boasts of fine glacial gold that were predominant in Sycamore and Gold Creeks, as well as Greenhorn Creek in the community of Wilbur in the Gregg Township, which was noted to carry gold-bearing gravel.

Johnson County has Highland Creek, which is located a few miles north by northwest of Martinsville. Gravel deposits and stream sandbars have gold that can be obtained by panning.

Warren County is the location of Falls Creek, which contains gold in its gravel bars and the decomposing shale of their stream beds. Gold tends to be mostly flour with some flakes sized about ⅛ of an inch, and sometimes, with grain-sized ”pickers” that are easily captured using a good sluice box. 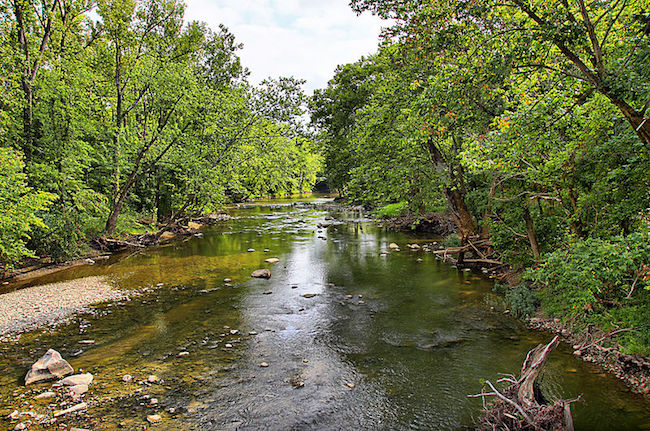 Generally, a gold prospector will dig down to bedrock in search of the richest gold deposits. Keep in mind that thick, dense clay can act as a “false bedrock” and concentrate lots of fine gold.

Wayne County has reported large amounts of glacial gold and pickers, particularly in Nolands Fork Creek, which is one among the forks of the west fork of Whitewater River.

Several other creeks and regional streams cutting throughout the state have strong potential for gold deposits, such as the following watercourses that have previous gold recovery histories: 14 Mile Creek in Charleston State Park in Clark County; Silver Creek, also in Clark County; and, the Wabash River near the county seat of Logansport City in Cass County.

And: Catch the Smallest Gold with the Gold Cube Concentrator

As with so many of the gold occurrences in the Midwest, reports are somewhat limited due to the fact that no commercial mining operations ever took place. Prospectors that have success often don’t share their locations, so it is certainly likely that many more creeks and rivers will produce fine glacial gold.

There are many creeks throughout Indiana that have never been prospected. As a result, they likely have considerable amounts of gold that could easily be recovered. Since most of the Midwest produces very little gold compared to the West, much has been overlooked.

Bring along a gold pan and start exploring. Try prospecting in areas that other people may have missed. You might be surprised with how good the gold mining actually is in Indiana.