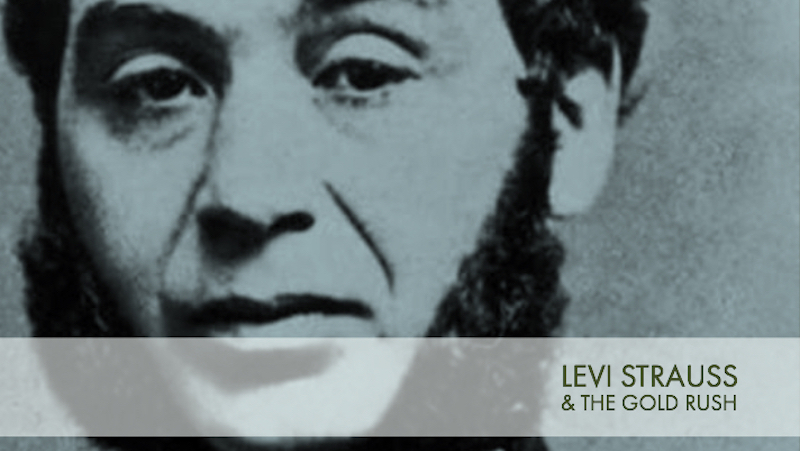 Life sometimes can be very surprising looking at how it creates opportunities that change people’s lives when they are lucky enough to see and run with one.

The California Gold Rush brought fortunes to many men, but more often than not the men who came to strike their fortunes returned home with little to show for their efforts. For every rich miner there are a thousand who were struggling to buy enough to eat.

History has taught us that it wasn’t the miners who generally struck it big in California… it was the business men. And one of these men was Levi Strauss. Let’s look at an account of this fascinating man, and see how a one time opportunity of the Gold Rush in California brought about a fortune of a life time.

Levi Strauss in the California Goldfields

Levi Strauss was born on 26th February, 1829 in Buttenheim of Bavaria, to Mr. Hirsch Strauss and his second wife Rebecca Haas Strauss.

Levi learnt the skill of dealing with the garments when he joined his two older brothers in New York who were running a wholesale dry goods business known as J. Strauss Brother and Company. Eventually the news about the Gold Rush in California, motivated Levi to head to San Francisco.

It is recorded that in the year 1853, Levi Strauss started making good quality pairs of trousers using a heavy brown cloth, and these goods were specifically designed for the miners in the area. Mining was hard work and these men needed quality built clothing.

By 1873, his business was booming, and the began experimenting with another material. These were the first denim blue jeans were made. With this new invention, Strauss was able to provide strong garments for the miners, as this was the best clothing on the market with the reliable ability or strength to endure the challenges that came with manual labor. Hence, in 1900 the company was going by a slogan “For Men who Toil”.

From that time of the California Gold Rush Levi Strauss and company had spread to almost every corner of the earth, since it became the biggest cloth manufacturing industry producing garments for men and women alike. 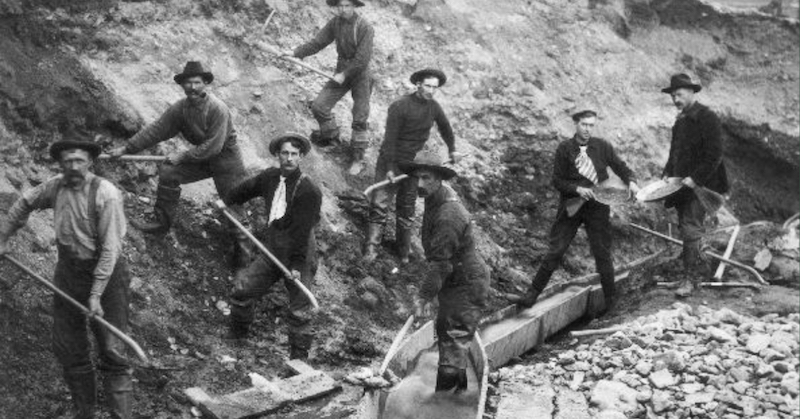 Digging for gold was hard work and good equipment was needed. Levi Strauss supplied men with heavy duty garments that could hold up to the difficulties of the goldfields.

The Levi’s 501 jeans have an interesting feature of the copper rivets on the corner of the pockets. The story behind the rivet dates back to around 1872 when a particular tailor from Nevada named Davis came up with the design after receiving a complaint from a female customers whose husband was reported to have been wearing through his garment too quickly. Since that day, Davis designed the copper rivets on the pockets, which was later emulated by other tailors in the area.

However, at the time of his super invention, Davis did not have the paperwork to patent his new design. Meanwhile, the design became the most wanted, and was on high demand. But the demand was already rising above his capabilities. Hence, in order to meet the demands adequately, Davis partnered with Levi Strauss who was supplying him with the fabric. Later, the two partners applied for a patent, which was granted on 20th May, 1873.

Sooner than later, Davis relocated to San Francisco where he was overseeing the manufacturing of the garments, which were called riveted “waist overalls” at that time. The pants became so popular among the miners that they were almost considered a necessity for serious work in the goldfields.

Also Read: Mark Twain Spent Time as a Miner in the Old West

And: Early Days in Deadwood – A Rough & Rowdy Mining Town

A Businessman to the Core

It is also important to note that during the same time of Gold Rush in California, Levi was privileged to embark on other business ventures during his career. He was once a Charter member and treasurer of the San Francisco Board of Trade in 1877.

Levi is also reported to have directed the Nevada Bank, the Liverpool, London and Globe Insurance Company as well as the San Francisco Gas and Electric Company. In 1875 it is also on record that Levi together with two of his associates bought the Mission and Pacific Woolen Mills. He was also a man of generosity, who impacted several lives with his wealth.

In a nutshell, Levi’s journey into his fortune was brought about during the California Gold Rush of the 1800s, and because of the good quality products he produced with his company. He earned himself a very admirable reputation which saw the growth of his business and company up to today’s generation and certainly future generations as well.

So many valuable lessons can be drawn from this account, such as having the confidence to believe in your own unique abilities and skills. As it is evident from Levi’s life. While everyone was busy running up and down to have access to the gold, he decided to overlook the idea and capitalize on the thousands of hopeful miners by providing them with a durable garment that could stand up to the harsh conditions of the goldfields.