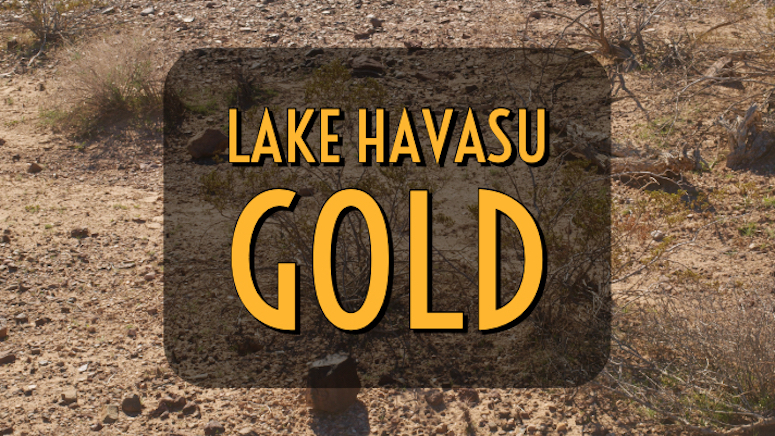 There are plenty of locations in the desert around Lake Havasu City where a prospector can find some gold. In fact, Mohave County is the 2nd leading gold producer in the state of Arizona.

Not everyone is familiar with the golden history of this area. Within an hour of the city you can find several very rich areas, some that have been producing for centuries. Several mines have a history of productive gold veins, and there are a few areas below that have produced gold nuggets weighing several pounds!

Let’s take a look at some of the gold rich areas around Lake Havasu that are worth exploring. Many of these areas are actively claimed now, but they can give you an idea of general areas that you should focus your prospecting efforts. There is lots of open areas out there that you can find gold. Do your research and you are sure to find some good prospecting ground.

On the other side of the Mojave Mountains south of Franconia you can find the Chemehuevis placers. This area has never produced large amounts of gold on a commercial scale, but it has been known for centuries as a gold producing area.

Most of the mining activity in this area took place during the Great Depression. Mining was a notable challenge because of the remoteness of the district and the lack of water.

This is a good area for prospecting today with modern equipment helping out quite a bit. Much of the gold is coarse textured and can be found with a metal detector. This area is also a popular area for metal detecting because meteorites are found from time to time. The Havasu Gold Seekers have some of the best claims in this area and might be worth joining if you want to prospect in this area. 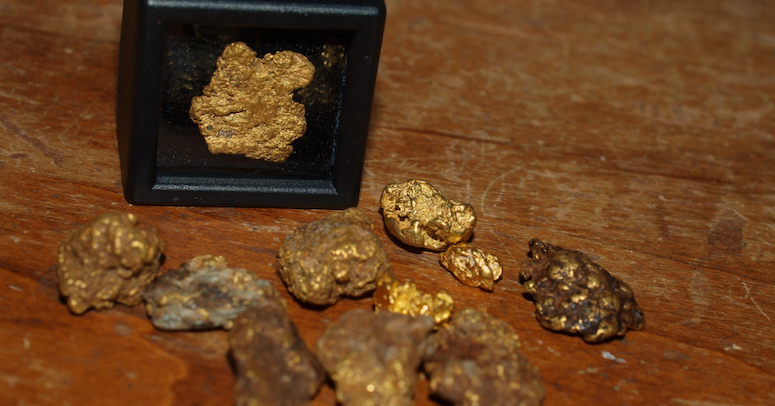 The Gold Wing Mine is located about 6 miles north of Lake Havasu City. It is located on BLM land on the southwestern flanks of the Mojave Mountains. This mine was never a major producer, but it does have documented production of both silver and gold. There is gold in the surrounding area.

Just a couple miles north of Lake Havasu City (east of the airport) is an old mining area called the Mexican diggings. This area is not well documented, but it is known that gold has come from many of the gulches in this area. It isn’t particularly rich, but there is gold all throughout many of these dry gulches. Just be aware of your location in this area, since there is State Trust Land here that is off-limits to gold prospecting without first getting proper permits in place. That includes metal detecting.

There are documented occurrences of abundant, narrow quartz veins that contain gold in the area around Crossman Peak. The Sunrise Mine is one noteworthy gold producer. There are many undocumented prospects scattered throughout the Mohave Mountains in this area. Often they are difficult to located and require “boots on the ground” to see them today. Collecting quartz float specimens and crushing them can produce fine gold particles. Many of the washes will produce small amounts of gold by drywashing. 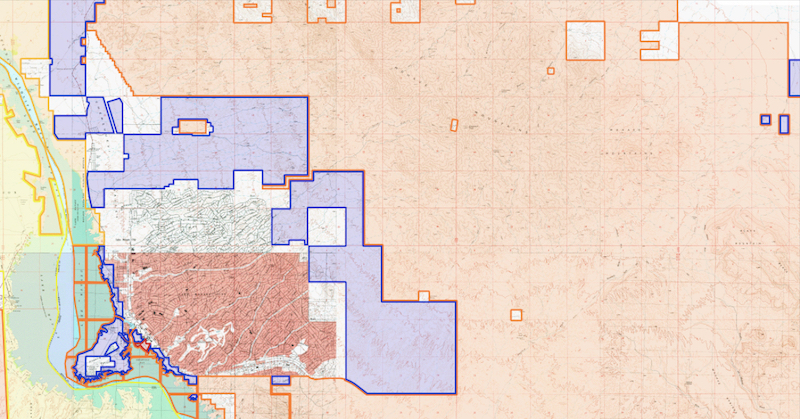 This map shows land ownership in the area adjacent to Lake Havasu City. There is a lot of open areas that you can prospect for gold, but you should be aware that things will vary depending on who owns the land. Bureau of Land Management, State Trust Lands, and Tribal lands and private lands are all present here. It is the prospectors responsibility to know where they are, and where they are allowed to dig.

Heading south from Lake Havasu, there are a few areas worth exploring around Parker. One known gold producer is the Angulus Mine. During the Great Depression this mine was active and they mined upwards of 100 tons of material from a shaft. Gold was graded as high as 1 troy ounce per ton. Fine particles of gold are present in sugary quartz.

It only take a little over an hour to get to Oatman from Lake Havasu, but considering the amount of gold that has been mined there it might be worth the drive. Located in the Black Mountains, it is now a very popular tourist town with an “Old West” feel that still exists. There was over $40 million dollars in gold mined from the mountains around Oatman! You can still find abundant gold in this area. There are lots of active claims up here, so be sure to do your due diligence before you start digging.

There are lots of areas around Quartzsite and all throughout La Paz County that are good for prospecting. This has long been a favorite for prospecting “snowbirds,” particularly metal detectists looking for gold nuggets.

The placers around Quartzsite have been hunted hard over years but you can still find plenty of gold here. It’s worth the drive. 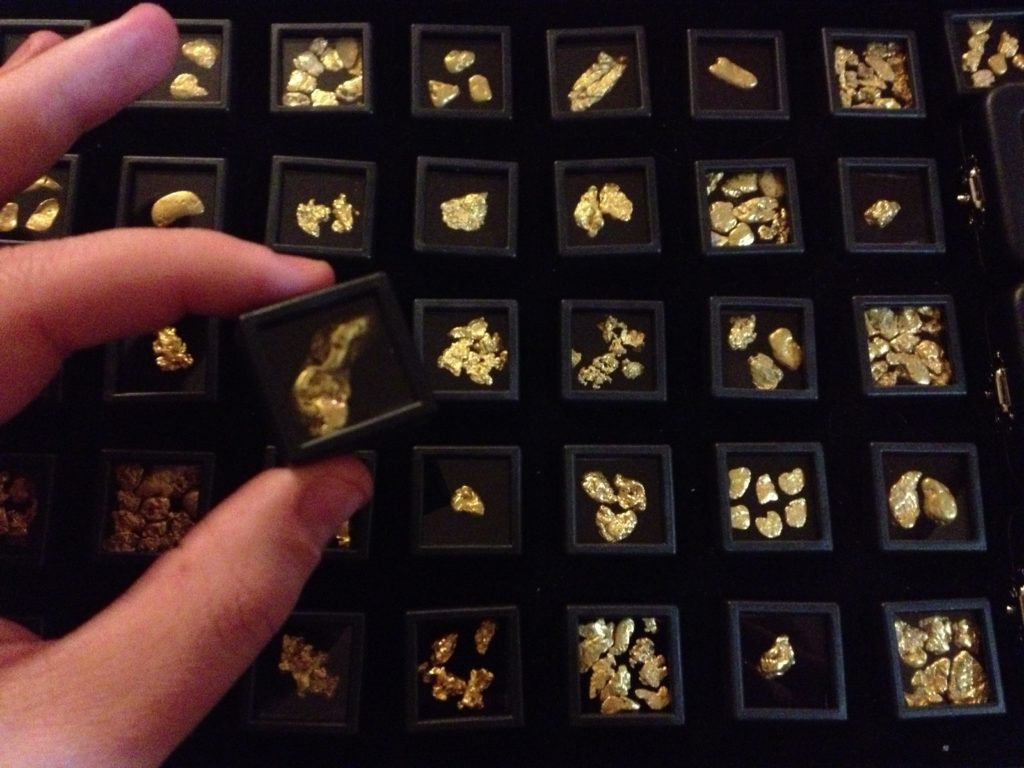 It is important to understand that many of the gold producing areas in Arizona were never documented, have no established mines, and research will only do so much! To find gold you are going to need to get out there and find it!

The area around Lake Havasu is a great example. I suspect that pretty much all of the dry gulches and washes have at least some gold in them. Some of them were worked by the “old timers,” but a lot of them simply weren’t rich enough to warrant much attention. That doesn’t mean that there isn’t any gold!

Research is always valuable, but don’t be afraid to venture out and try some new areas. There is a lot of desert out there and I can assure you that all of the gold hasn’t been found yet.

It’s no secret that water isn’t too plentiful in these parts. Yes, the Colorado River is right here, but aside from that, you won’t find very many creeks running except for during rare flood events. This means that you will need a dry operation to recover gold.

Drywashers are needed for most circumstances, but you might find that metal detecting is more productive and certainly more pleasant than shoveling dirt into a drywasher all day.

To successfully find gold with a metal detector you should make sure you are getting down to bedrock where the gold is going to settle. Most of the gold here is small, so you will need to get your coil as close to the gold as possible to hear it.

Stay safe when you are out there exploring. The desert can be an unforgiving place. Keep survival gear with you and be prepared for those hot desert days. 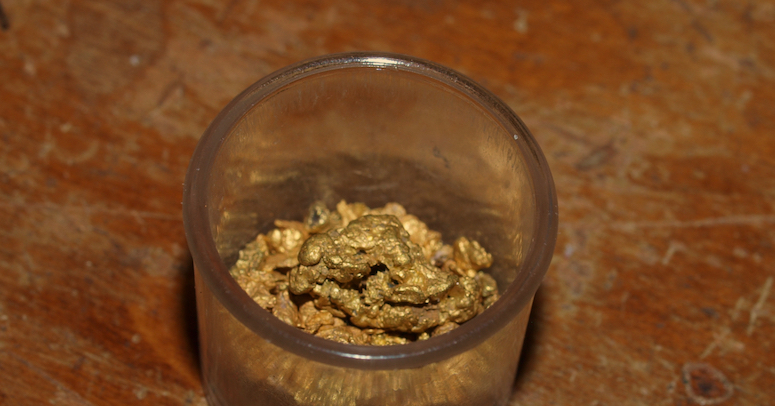