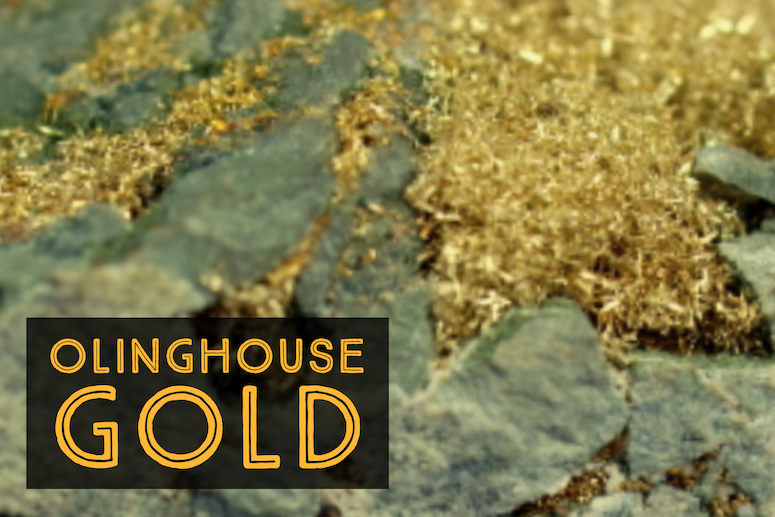 One of the more interesting gold deposits in Nevada is found about 35 miles east of Reno in Washoe County.

There are a few things about the Olinghouse district that make it unusual. First, it is the only significant mining district in Washoe County. And second, the mines here produce some very interesting crystalline gold.

The small fractured gold specimens are easily identified by collectors. If you go to any of the big mineral shows you will usually see some high-grade gold specimens selling for several thousand dollars.

The geology in most of Washoe County is quite a bit different than most of Nevada, and as a result you won’t find as much gold here. Even though it is close to the famous Comstock Lode, the geology is very different.

Lava flows and ancient lake beds dominate the northern end of the county. There is little in the way of economically viable mineral deposits here. The only noteworthy gold deposits are at the far southern end closer to Reno.

In the early days of Nevada mining history, there was a decent amount of placer activity that primarily took place at Little Valley, Olinghouse and Peavine. Compared to this strikes of the Comstock these were of little significance.

The rich mining area is located about 12 miles south of Pyramid Lake. Gold was found here early on. There was some placer mining being done as early as 1860, but were clearly overshadowed by the Comstock strikes, along with many other rich discoveries made throughout Nevada in the late 1800s.

Olinghouse got new attention around the turn of the century. Some mining took place from 1901 to 1903, with extensive prospecting being done around Olinghouse Canyon and Green Hill.

This was primarily a gold producing district. The gold is primarily free-milling and was recovered by a variety of methods. Most of it contains a high percentage of silver alloy. Only around 36,000 ounces of gold have been reportedly produced here. Actually production is likely double that. 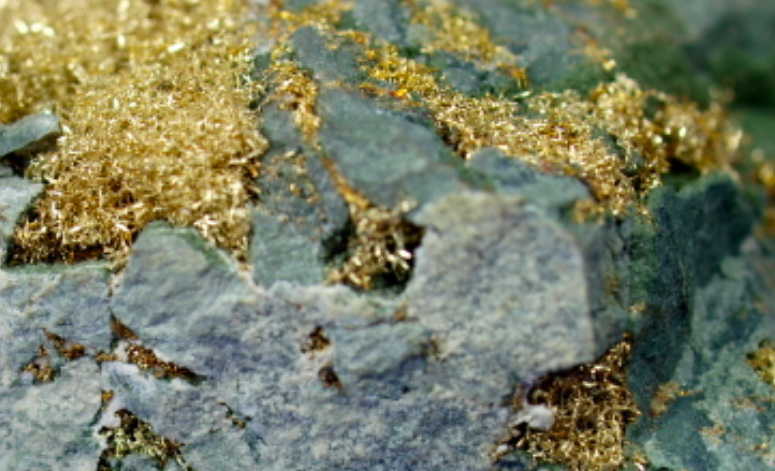 Olinghouse would not be particularly noteworthy or well-known if it was not for the rare crystalline specimens that are produced here. Most of the specimen gold has a distinct, spongy texture with highly fractured crystals. Gold is very wirey and on the best specimens they are tightly nested.

Ores were almost always found as high-grade, free milling ores with visible gold. Most of the specimen grade pieces come from around Green Hill and from the 813 Pit. Most gold is attached to a grey/green andesite matrix.

The majority of specimen gold here is tiny bit measuring less than 1mm in length and require a good loupe to enjoy them. Only truly select pieces are of any size at all. It is quite likely that the best pieces found by the early miners were crush along with the ores and never noted in the history books.

Specimens are fragile in nature and as mentioned earlier they are quite distinct. Experienced collectors can identify Olinghouse gold by sight. Pieces with high silver alloy can actually darken the gold and will even tarnish to some degree, quite odd for most natural gold.

The Rise and Fall of Mining in Tonopah