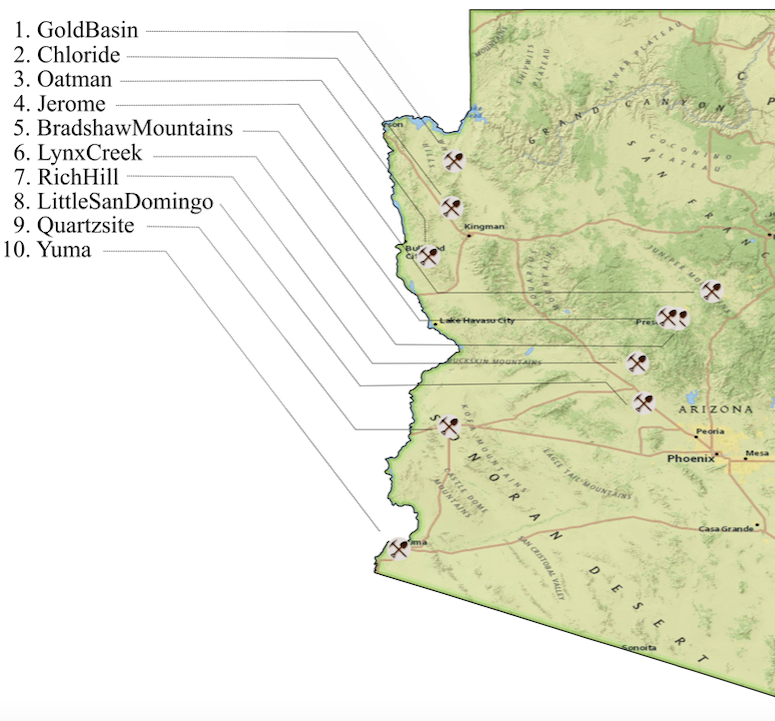 For most gold prospectors, the best areas to search are in eastern and central Arizona. From high in the Bradshaw Mountains down to the Mojave Desert you can find scattered mining camps.

This is a expansive area southeast of Las Vegas. Although gold has been known here since the 1870s, most of the historic mining activity occurred during the Great Depression.

Nowadays, there are a few guys that come here to metal detect for isolated gold nuggets that are scattered across the basin. They are few and far between, but there are some nice ones left to find.

North of Kingman along the western flanks of the Cerbat Mountains is the old mining town of Chloride. There are still people living here and its easily accessible from the highway. This was a silver mining town, but in later years the mining expanded to include gold, zinc and lead.

Oatman was one of Arizona’s most productive mining towns. The gold ores found in this area were exceptional. Now it is one of the most popular tourist destinations in northwest Arizona. You can feed wild burros that casually walk around town and take a walk downtown.

This was one of the biggest copper mining regions in the United States. William Clark, who was also involved in the copper mines in Butte, Montana, was the major developer in Jerome. The town is well-preserved and a popular place for tourism. Many of the old structures are still intact.

The Bradshaw Mountains contain very widespread and extensive gold ores. There are lots of abandoned gold camps here. You can still find a lot of gold in thousands of isolated locations throughout these mountains.

A very popular area for prospectors is Lynx Creek. There are several miles along the creek, located near Prescott where they have withdrawn from mineral entry. This means that the area is open for casual prospecting. There is a lot of good gold and its a very popular area to pan.

Just east of Stanton is an amazingly rich gold mining location. Rich Hill is probably most famous for the “Potato Patch,” an area that produced some exceptionally large gold nuggets that weighed up to several pounds each. There is still lots of mining going on in this area today, but pretty much everything is claimed up now.

There are a thousand little washes that contain gold that feed into the Little San Domingo was near Wickenburg. At one time there were thousands of miner scattered around this desert searching for gold with drywashers. The Vulture Mine also operated for years and was the states top gold producer for years. There are still lots of good places to hunt with a metal detector in this area.

There are gold nuggets scattered all throughout the desert around Quartzsite. There are thousands of small prospects within an hours drive. There are lots of prospectors here in the winter. If you visit be sure to check out the Gem & Mineral Show that goes on here every winter.

This is another place that attracted thousands of miners at one time. The Castle Dome Mountains, Gila Mountains and Kofa Mountains all had established mines operating in the late 1800s. Explore this area and you will also see lots of old drywasher tailing piles and signs of old mining activity.

Miami was one of Arizona’s major copper boomtowns. The amount of mining that has occurred here is nothing short of exceptional. There are miles and miles of open-pit mines just north and west of town.

Globe is another interesting mining town associated with the mines of Miami. It’s about an hours drive from Phoenix and a cool area to explore.

Everyone knows about Tombstone. Wyatt Earp and the Shootout at the OK Corral is what Tombstone is famous for, but it was rich silver ores that brought the rough and rowdy crowds to southern Arizona. This is certainly a neat old mining town to explore, but it’s far from a “ghost town” since its perhaps the most famous old west town. The town sees tens of thousands of visitors every year.

Way down by the Mexico border is the old mining camp of Bisbee. Copper, gold and silver were all mined here. Three million ounces of gold and eight billion pounds of copper are credited to this region. Some very nice turquoise has also been mined here. Mining started in the late 1800s and continued well into the 1900s. This is a really neat town to explore with lots of old building. 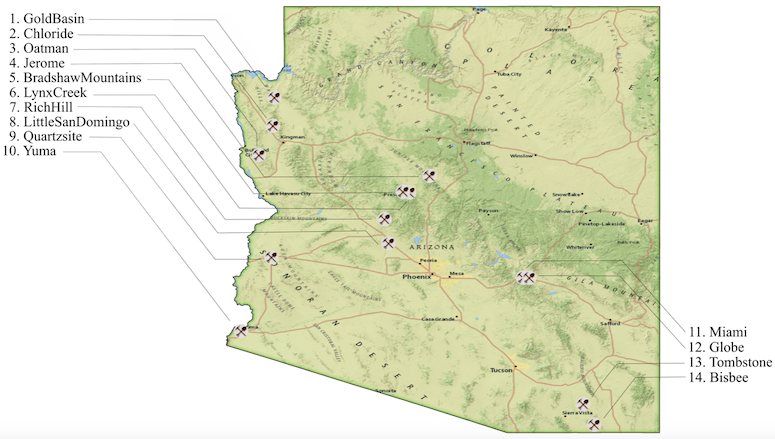