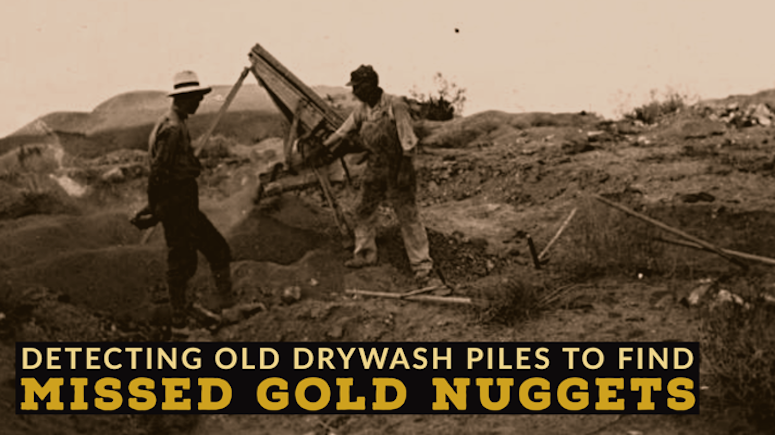 Gold prospectors in arid regions are limited in the ways that they can recover gold. Many of the methods that work elsewhere are not feasible in the desert.

The reason is simple. Water is the basic requirement for a wide variety of placer mining methods. Panning, sluicing, dredging, high banking, and even using a simple rocker box all require some water.

Yet, in many parts of the world (and here in the USA in places like Arizona and Southern California) the gold deposits are too far away from water to be worked effectively.

Back in the old days, miners would often dig ditches for many miles to reroute the water from creeks so that they could work these dry placers. Yet in some areas, this simply wasn’t an option.

A device known as a drywasher (also sometimes called a dry blower or Mexican jig) was the tool of choice for the early desert miner. They were the perfect piece of mining equipment for the individual miner to work isolated desert gold placers far from any existing water.

Rather than needing water like so most other methods, a drywasher uses a combination of vibration and puffs of air to agitate and separate gold from gravels. Miners simply shoveled dry dirt into the machine, and chunky gold flakes and nuggets could be recovered from the desert dirt. 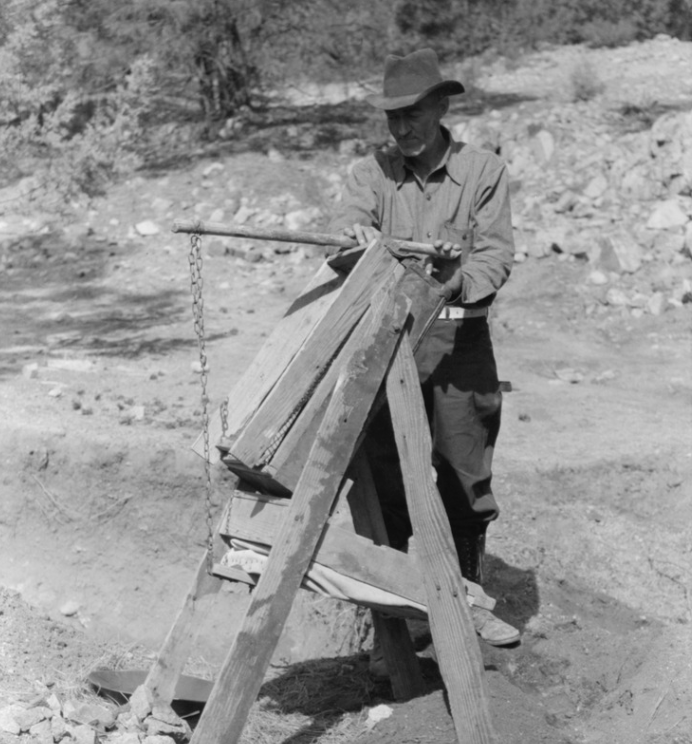 These were used commonly throughout the early days in the American West, most often in the late 1800s, and again with the resurgence of mining during the Great Depression in the 1920s an 1930s.

Drywashers were the best tool for the job, but they had their drawbacks and inefficiencies. In fact, this is one of the reasons why their early use should be of interest to the modern gold prospector.

As important as the drywashers were for opening up areas that would otherwise be economically unviable to mine, they had one big disadvantage. They simply weren’t all that efficient.

A considerable amount of gold was missed by these old drywashers. There are many things that can cause the loss of gold from a drywashing operation. Slightly damp soils might prevent the gold from separating out from the dirt. Adjustments on the machine may not have been set correctly leading to some losses. And specimens of gold with quartz attached might simply tumble through the machine because the specific gravity was too low.

Even under the best of circumstances, dry operations simply aren’t as efficient as wet ones. Sluices in the water will recover gold better than drywashers.

The early miners could still make it worth their while to mine if an area was rich enough, but no matter how well they did, they were still losing some gold in their tailing piles.

We know that these old dry mining operations missed some gold, so they are the perfect place for you to come back to and seek out the gold that was missed. And the tailing piles left behind are the best indication of these early operations.

It might be surprising to some that a trained eye can still spot an old drywasher operation from 100+ years ago. They are actually pretty easy to located if you know what you are looking for. There will be unusual piles of rocks and gravels, often alongside a dry creek bed or gulley. Rocks will often be sorted in similar sizes and look a bit out of place from their surroundings. Large tailing piles can often be seen using Google Earth and similar aerial imagery.

You have to ask yourself, why would this rock pile be here? If you are in an area that is known historically for gold mining, then you can bet that you’ve found an old drywasher pile. Anywhere with these piles is a tell-tale sign that miners found gold here.

And: Metal Detecting and Drywashing in Arizona

Now is where we use modern technology to our advantage. Those old drywashers missed some gold (sometimes nice nuggets) that can be easily located with a good metal detector.

Swing your coil slowly and deliberately over the gravel piles, taking extra care to go over every bit of the pile and extend your search several feet to the sides too. Be thorough. 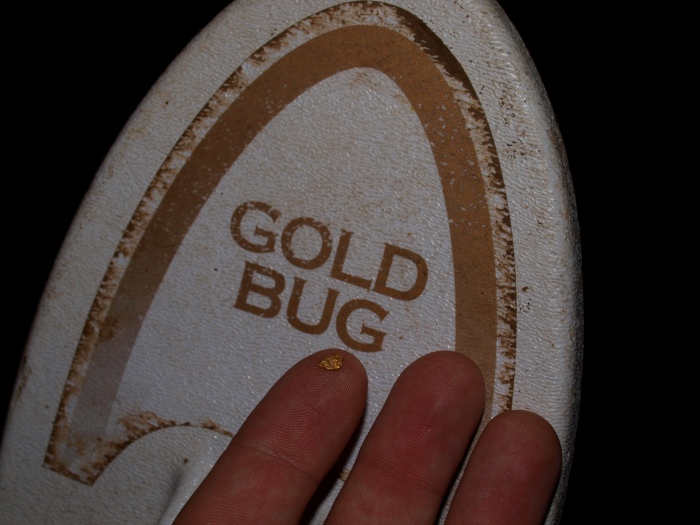 When detecting drywash tailings, I recommend bringing along a sturdy rake. After scanning the top of a pile, take off about 2 inches of gravel from the top and scan it again. Repeat this process throughout the pile, each time doing a slow and deliberate search of the newly exposed pile. This method will often turn up very small nuggets that were out of reach before.

This is particularly effective if another detectorist has already searched the area. They may have come in and cleaned out the surface nuggets, but a little extra effort with your rake can lead to a lot more finds.

The idea of detecting these old piles is certainly not a new idea. In fact, detectorists have been doing it for as long as good gold detectors have been available. This makes the rake-and-detect trick even more important.

One other thing that I would recommend is to extend your search off of the piles and explore the surrounding hills, even if there is no evidence that would indicate past mining efforts. Some might call this patch hunting. The nearby tailing piles are proof that gold occurs in the area, so now you extend your search to nearby gulches and washes that may have been missed by the old-timers.

Metal detectors are awesome tools for the modern prospector, and they allow us to rework old ground in a different way. You might be surprised at the size of some of the gold nuggets that the old desert prospectors missed.