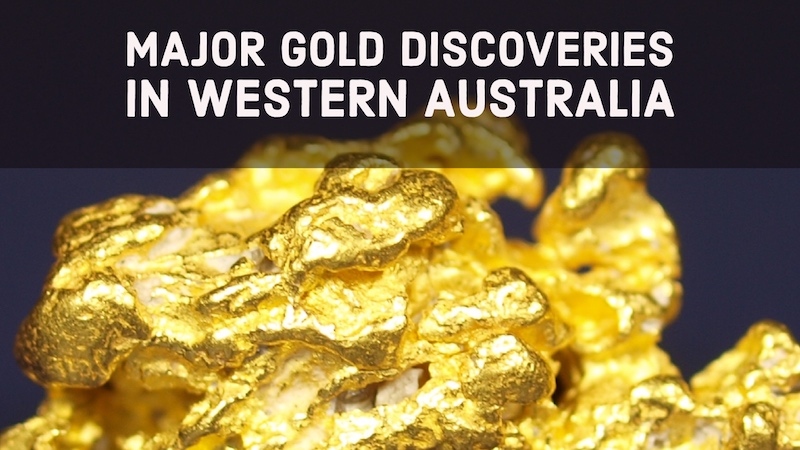 Gold in Western Australia was first identified in ore specimens from the Murchison lead and copper deposits after being assayed in Adelaide in 1848. During 1852-53, shepherds and early prospectors discovered rich specimens of gold-bearing material in the eastern regions, but later found difficulties of tracing back the exact locations of their discoveries.

In 1854, specks of gold in quartz were found in Bowes River in the Murchison district in the Mid West region by the English explorer and surveyor-general Sir Augustus Charles Gregory. Prior to his visit in the area, he had reportedly debunked an earlier recorded gold discovery near Perth which actually turned out to be yellow mica.

In 1861, Joseph Anderson Panton found several rich specimens of gold-bearing quartz near Northam; and in 1882, a gold nugget weighing 14 ounces was picked up by Mr. A. McRae while traveling to the gold rush town of Roeburne in the Pilbara region.

In 1885, Jack Slattery and Charles Hall stumbled over gold just about everywhere in the area of Hall’s Creek and the Elvire, Margaret, and Ord Rivers, all of which are situated in the Kimberley region. The find triggered the Kimberley Gold Rush in the spring of 1886.

In the following year, attention was shifted in the town of Southern Cross in the Shire of Yilgarn and the Central Yilgarn Craton, where the precious metal was found by Harry Francis Anstey and party. The field sparked the Yilgarn Gold Rush, which commenced in 1888.

The area’s notable mines were the Fraser’s Mine, Marvel Loch Mine, the Big Billy Copper-Gold Prospect, Yarlarweelor open pit gold mine; the numerous diggings around Kanowna, and the open cut Copperhead Mine at Bullfinch. 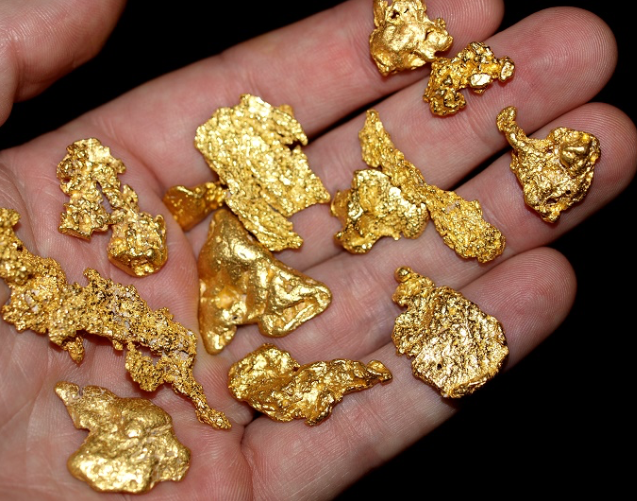 Rich gold discoveries occurred at the Mallina and Pilbara Creeks around 1887. Later, the gold fields of the Shires of Yalgoo in the Murchison district and Ashburton in the Pilbara region were established, producing some exceptional gold nugget discoveries.

In July 1891, gold was discovered in the Mt. Magnet region, where rich alluvial or placer deposits were mined over the Poverty Flats mining site and Hill 50 Mine — Australia’s deepest gold mine.

The small town of Cue, also known as the Queen of the Murchison, was the site of the Murchison Gold Rush of 1891. Today, the towns of Meekathara and Cue in the Gascoyne-Murchison area have become popular spots for gold prospecting and fossicking. Metal detecting is the preferred method of searching for gold nuggets here.

In 1892, the Coolgardie Goldfield was discovered by Arthur Bailey and William Ford, who both obtained over 500 ounces of gold in their first explorations into the area. Eventually, the Bailey’s Reward Gold Mine became one of the richest mines in the state. In May 1893, a group of miners led by Billy Frost and Jack Bennett discovered alluvial gold deposits at Goongarrie, formerly known as 90-mile, which was actually its distance from Coolgardie.

By the following month of June, prospectors Paddy Hannan, Tom Flanagan and Daniel Shea recovered 100 ounces of alluvial gold at Mount Charlotte. Their registered claim quickly sprang up a town which was initially called Hannans and later Kalgoorlie. Kalgoorlie is in the heart of Western Australia’s goldfields, where its rich alluvial gold deposits had been largely worked out by independent miners. But the discoveries of deep gold lodes and rich telluride minerals in the late 1890s at nearby Boulder gradually dislocated the autonomous miners.

By 1902 deep underground mining of payable gold 1500 feet below the surface became the norm with the Great Boulder Mine. Later, Boulder mining leases were known as The Golden Mile, and by all accounts, the area contained the some of the world’s richest known gold reserves.

After the discoveries in the Kalgoorlie-Boulder goldfields, gold was discovered in August 1894 by the Sinclair brothers in Norseman. It was once Western Australia’s second richest goldfield, next to the Golden Mile of Kalgoorlie. The Norseman Mine is Australia’s longest operating gold mine ran by the Sons of Gwalia. Today, Norseman is a small, sprawling town driven by mining and tourism and dominated by a huge tailings dump.

Over the years the Western Australian goldfields have continuously produced the precious yellow metal, including some of the largest natural gold  nuggets ever found on Earth. Even in the famous gold-bearing areas of Western Australia, most of the gold is much smaller in size, but gold nuggets can still be found in these well-known gold districts. 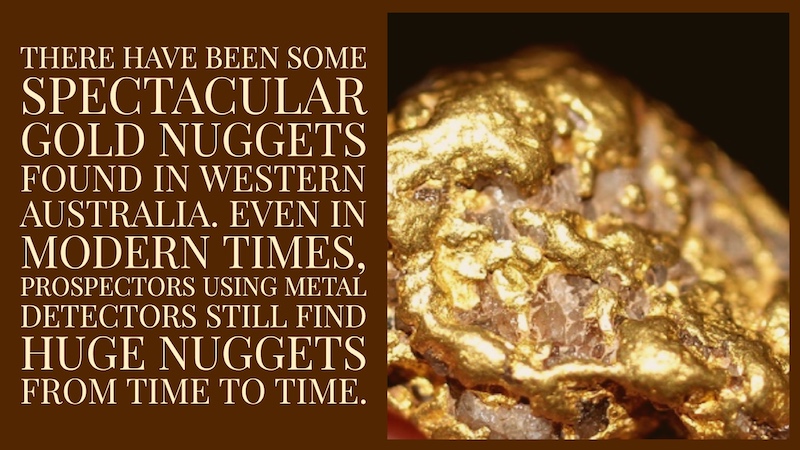 Gold nuggets form deep underground, where hot fluids deposit gold and quartz in reefs or veins. After millions of years of erosion, these reefs are exposed, and the quartz is broken down while the gold is washed out. Gold is inert, so it remains in soil and streambeds, where it can be found using a variety of methods. Due to the arid environment in most of Western Australia’s goldfields, a good metal detector is the tool of choice for many who prospect here.

Golden Eagle – This is the largest gold nugget ever found in Western Australia. It was found on January 8, 1931 by 16-year old Jim Larcombe just 45-cm below the surface of the ground in Widgiemooltha, now known as Larkinville. It weighed 1136 troy ounces or 35.3 kilograms, measured 62-cm long, and required two men to lift it. It was given the name “Golden Eagle” since it resembled a bird. Its discovery symbolized hope for Western Australians at the time of a major worldwide depression.

The Golden Eagle Nugget was sold to the State Government for £5,438, and at the height of the Depression in December 1931, the nugget was melted down to realize funds for the State. Today, a replica of the nugget can be seen at the School of Mines Rock and Mineral Museum in Kalgoorlie.

Ausrox Nugget – is the world’s third largest gold nugget in existence weighing at 23.6 kg, which is only behind the Hand of Faith and the Normandy Nugget. It was found by an anonymous prospector in April of 2010 from the eastern goldfields, near Kalgoorlie.

Golden Stonefish Nugget – is a commercial nugget found by Janet Mears, a.k.a. the Lady of the Lake, since most of her nugget finds were retrieved on or around salt lakes in West Australia. Its official weight as per the Australian Mint is 226.87 troy ounces or 7.056 kilograms. The nugget was found in northern Kalgoorlie in 2004, and is 91-95% pure (22K).

Normandy Nugget – was once considered as the world’s second largest existing nugget when it was first exhibited publicly for the first time at the Perth Mint on 9 April 2000. It was found by an anonymous prospector in the Kalgoorlie Region in 1995. The nugget was hidden under the prospector’s bed for many years prior to attempting to sell it in the United States. It is currently owned by an Australian mining company, and the 819-troy ounce lump of almost pure gold is now worth well over a million dollars.

Click the Map to Learn More About Gold Mining in Australia