The headwaters of the Arkansas River flows through some of Colorado’s richest mineral deposits.

This makes the river a source for major metal ores such as gold, silver, and copper among others. The most popular for the casual prospector to hunt for is gold. 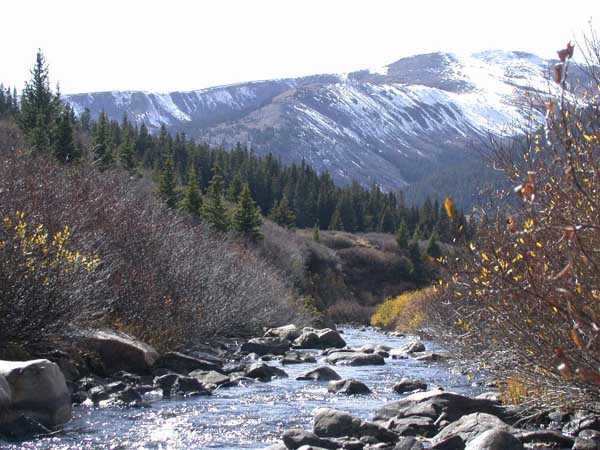 The headwaters of the Arkansas River drain some of the richest gold country in Colorado. Some areas have good amounts of gold that can be found by panning, sluicing, and suction dredging.

Gold was first discovered on the river in the 1540s by Spanish prospectors. Most of the early mining was small operations by Spanish miners. Today these old mines are simply known as the Old Spanish Diggings. These was relatively small mining activity.

The biggest gold prospecting on the Arkansas River was done during the height of the gold rush to Colorado when gold was discovered at Pike’s Peak and all throughout central Colorado. This led to the discovery of gold, silver and other metallic minerals along the river in several places resulting in intensive mining activities that lasted for several years.

And: Gold, Silver, and Lead Mines of Leadville

An Abundance of Fine Gold

Most of the gold found on the Arkansas River is flour like form although gold nuggets have been found at a few locations in the headwaters. In general, you will need to focus on the fine gold deposits to have success prospecting here.

Today the Arkansas River is still a popular gold panning site. The river is rich not just in gold, but it also has some great sightseeing and camping opportunities.

The gold on the river is in flour like form which requires a great effort and the use of the right equipment for you to recover a significant amount of gold. Panning will work, along with specialized sluice box

and other equipment that has been designed for this type of gold.

The best method used by prospectors to recover appreciable quantities of gold here is by using the suction dredging. However, it is important you pay close attention to rules set by the Bureau of Land Management in regards to the size of the suction nozzle.

Much of the area along the river is private property so you will need to do your proper research to make sure you can legally prospect in the areas that you are working. Seek permission from landowners where needed.

Some of the best places to find gold on the Arkansas River include:

This is one of the most popular gold prospecting spots on the Arkansas River. To mine the claims here you need to be a paying member of the Gold Prospectors Association of America. This location is known to have fine minuscule gold particles that are often mixed with pyrites.

The Buena Vista is a good area and a few hours spent on suction dredging should produce some nice gold.

Read: How to Prevent Fine Gold from Floating out of your Pan

Cache Creek is located just below the Granite Bridge along the Arkansas River. The creek is famous for the rich placer gold recovered from the site by means of hydraulic mining. The creek was a popular gold mine in the 1800s but by 1911 all mining operations were stopped because of environmental concerns.

By 1911 it was reported that the creek had produced gold worth more than three million.

Today the creek still has some placer gold rich gravels that can produce some value for recreational gold prospectors. Cache Creek and the surrounding BLM lands are open for recreational gold mining using pans and other non-motorized methods. Suction dredging is not allowed due to environmental concerns.

There is also a public camp site nearby which makes the whole experience great. Over the years gold miners have recorded impressive finds which make the creek a perfect place for anyone who wants to find some real gold.

This area has received considerable prospecting pressure over the past few years and the BLM has put new regulations in place which require a mineral collection permit and restrict prospecting to only part of the year. You will want to contact the local BLM office to get the most up-to-date information about gold prospecting at Cache Creek.

Some have made claims that the richest gold discoveries on the Arkansas River were along streams that drain the Ouachita Mountains in Arkansas and Oklahoma. Some of the land here is public land that is open to prospecting.

Unfortunately, the hype about gold in the Ouachita Mountains is probably bigger than any actual gold discovery. Your probably better off spending your time looking elsewhere.

As mentioned earlier, you aren’t likely to find big gold nuggets in the Arkansas River. What you will find is an abundance of extremely fine gold dust. This dust can add up, but you need to use special equipment to help capture it.

This is one reason why the early prospector of the 1800’s paid little attention to most parts of the Arkansas River, because it simply didn’t pay to mine.

With today’s modern equipment, it is possible to capture these tiny gold particles which can actually be profitable if you find a nice concentration hidden underneath the river gravels.

Next: Find a Secret Gold Prospecting Spot – These Research Tips Will Help…