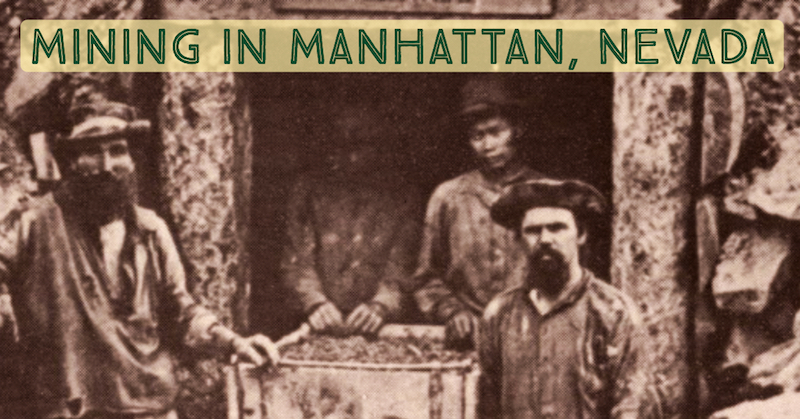 Only about a hundred people call it home now, but it was not always like that. A century ago the town of Manhattan, Nevada was the center of mining. Lets take a look at the early history of this once flourishing mining center.

The First Strike at Manhattan

Nevada and its mountain Ranges are famous for the silver and gold rushes that started in the 1860s all over the state. This search for precious metal eventually brought future prospectors to a big gulch that was named Manhattan Gulch. It was a place with silver deposits as was indicated by placer mining.

By 1866, a whole mining district was formed in the Manhattan Gulch and soon after that at the elevation of almost 7,000 feet, the town of Manhattan was founded. Little is known about the population of this town or its way of life but it is a fact that in only 5 years, the richest ore was depleted around the town and it was abandoned completely. However, that is not the end of the story.

It was 1905 when two cowboys were herding cattle and stumbled upon some ore once again in Manhattan Gulch. It turned out to be worth $3,000 a ton, a very high-grade ore. This discovery resurrected the all but forgotten Manhattan. It turned out that it was rich enough that gold veins were visible running through the rock.

The place turned out to be filled with even more rich ore than the early prospectors ever realized, and so, in 1905 the town was booming once again. Buildings were constructed all over the place and the population increased to a healthy thousand. The town even got itself three banks and people started publishing a newspaper which tells us a lot about the significance and size of the town. Things seemed to get brighter for the town.

And: Metal Detecting in Nevada for Lost Coins & Relics

In April 1906 a devastating earthquake shook the coast of Northern California to its roots. The magnitude was estimated to be as much as grade 8 and the intensity to be extreme. Once a large city, San Francisco was made into rubble, almost 80% of the city was ruined completely. As if that wasn’t enough, a terrible fire broke out all over the place. This earthquake is one of the most devastating events in US history. It killed over 3,000 people and left even more with no home or means of existence.

How does that concern Manhattan? Well, the town was not that far from San Francisco and suffered for some degree because of the proximity. The town was dependent on investors from San Francisco, as well as suppliers who came from the city to provide much needed material to work the mines. Manhattan was left without resources to expand.

Unexpectedly, many businesses didn’t go bankrupt and remained for a time and some newer discoveries of placer deposits in the Big Smoky Valley prolonged the life of Manhattan. However, it was just a shell of what it was before.

Despite all the early difficulties faced in the early days of Manhattan, there was still lots of precious metals hidden in the hills around town. If you visit today you will see several open pit mining operations to the west of town. These operated over the past few decades and resulted in considerable gold and silver discoveries.

Despite the fact that there are only around 100 people and the town now, it has a small hotel and if you are interested in gold mining processes and the history of American gold prospecting, it will be a great spot to visit.

Many buildings from that time managed to survive despite the considerable damage done by the ravages of time.

Next: 15 Spots in Nevada with Fossils & Petrified Wood