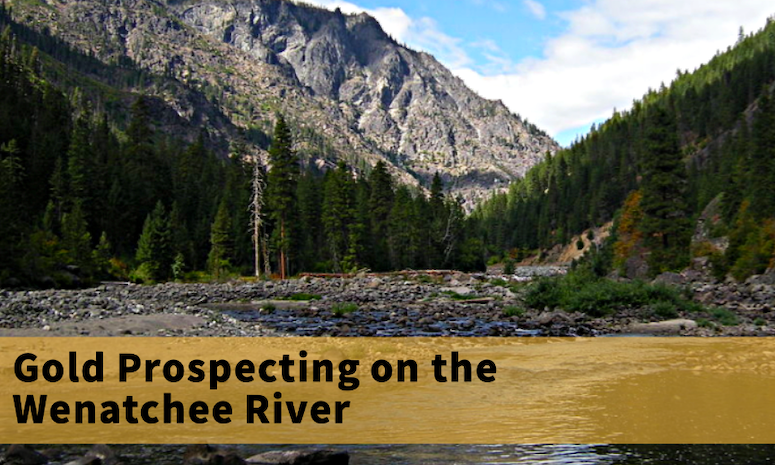 Washington was one of the states to get attention from the early gold miners. While gold has been known to occur here since the earliest days of the gold rush to the West, much richer deposits were exploited first.

Eventually, the miners and prospectors would arrive in Washington to discover that there was fairly abundant gold throughout the Cascade Range. While it lacked the richness that would spur a stampede like other states, there was still profitable sites worth mining.

One such area is the Wenatchee River and a few of its tributaries. It contains gold all throughout its gravels from the headwaters of the Cascade Mountains all the way down to the confluence of the Columbia River.

Much of the river itself is situated on public land with the Okanogan-Wenatchee National Forest. There’s good prospecting opportunity here, and even now a gold panner can sift through the gravels and find small specks of gold dust hidden beneath the lighter rocks and sand.

Mining Bulletin No. 42, Titled “Gold in Washington” notes the occurrence of placer gold in the following waterways within Chelan County:

Clearly the gold here is widespread, with the Wenatchee River and many of its tributaries being known occurrences. Below, we will highlight a few of these locations. Please note that while there are still many area on public land that are open to casual prospecting, there is also private lands (that require permission) and Wilderness areas (that do not allow prospecting). Do your due-diligence before you start digging to ensure you are staying out of trouble. 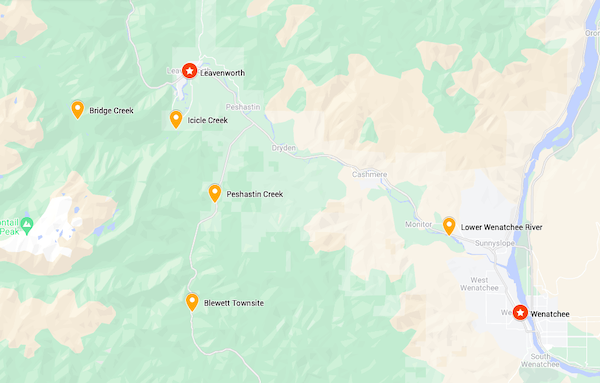 The Wenatchee River from Leavenworth down to the mouth is the most productive for gold panning. Several tributaries, particular up around Blewett Pass, are also very rich prospecting areas.

An area of particular interest is around Leavenworth, where the earliest reports of gold date back as far as 1853. Gold was documented in the area but not mined for many years. Eventually several historic mining claims located on the river. Downstream toward Peshastin and the mouth of the Peshastin Creek was noted for having particularly rich placers. And further down toward Dryden also saw a good amount of mining activity in those early days.

The headwaters of Icicle Creek start all the way up at Stevens Pass, then flows down a steep canyon surrounded by towering granite mountain peaks as it makes its way to the river. A road follows along the lower section of the creek for many miles, but you’ll need to hike if you want to access the upper headwaters of Icicle Creek. Check to make sure you aren’t in the wilderness. Gold prospecting is not allowed in the Alpine Lakes Wilderness. 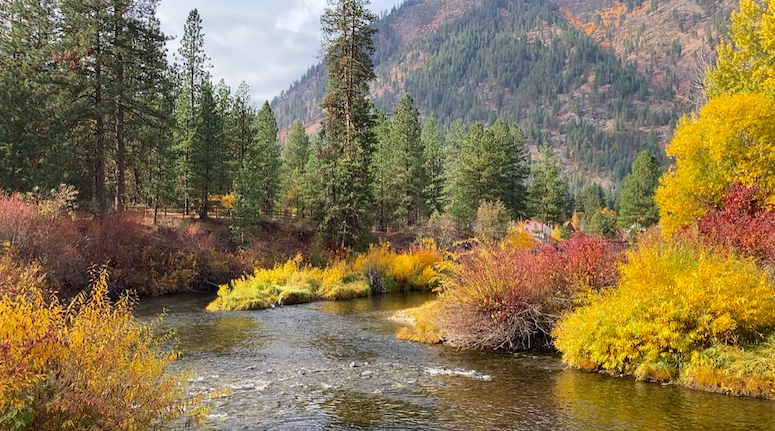 Leavenworth can be an expensive place to visit in the summer. Fortunately there are several nice spots to camp along Icicle Creek. Public campgrounds like Eightmile, Bridge Creek, Lower Johnny Creek, Ida Creek, Chatter Creek, and Rock Island Campgrounds provide lots of opportunities for summer visitors. Other private campgrounds and RV parks might be worth looking into if you visit during the summer months. Otherwise, you can expect to pay “tourist prices” for a hotel room in Leavenworth.

Historical reports indicate that a placer gold mine was worked on Icicle Creek near the mouth of Bridge Creek. Sampling of Icicle Creek with a gold pan will indeed turn up some small specks of gold dust. The occurrences here don’t seem rich enough to have warranted any extensive mining, but there is certainly enough here to be worth exploring. In the early season, expect a wall of whitewater. Your efforts will be best left to late summer and fall, when you can more easily access the exposed gravel bars.

Of all the main tributaries that feed into the Wenatchee River, Peshastin Creek is definitely has the most gold. A good amount of mining has taken place here since the early gold rush day, particularly after the rich mines at Liberty were established to the south. The earliest reports of mining in this area date back to 1860.

Peshastin Creek flows from Blewett Pass northward toward the Wenatchee River. It is easily accessible as it runs alongside Highway 97 on its way toward Peshastin and Dryden.

This creek once had considerable mining activity along its banks. A trained eye will notice rock piles indicating old placer diggings that were once active. The townsite of Blewett, once a thriving mining camps with 200-300 people, now sits abandoned. If not for the remains of an old stamp mill and a plaque at the townsite, few would even know that it existed. 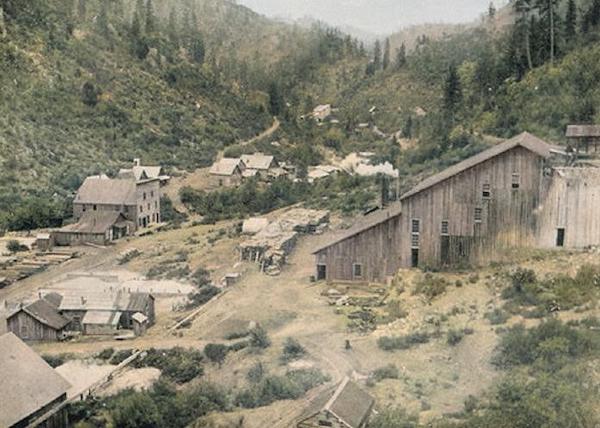 Blewett, Washington hardly exists today. Men first mined the “easy” gold from Peshastin Creek, but eventually a handful of lode mines were established in the surrounding hills that would sustain the town for many years to come.

After the placers were worked out, quartz veins containing stringers of gold were located in Culver Gulch, helping to establish underground mining operations that would help to sustain the town for quite some time.

The gold here was noted to be unusually coarse when sizable bits were found. Occasional nuggets, but mostly small pickers are present. Fine flood gold is present throughout the stream.

Other known tributaries to explore include Negro Creek, Ingalls Creek, Ruby Creek and Hansel Creek. Anywhere in the vicinity of lower Peshastin Creek and south of the Wenatchee River has a decent chance to produce some gold. 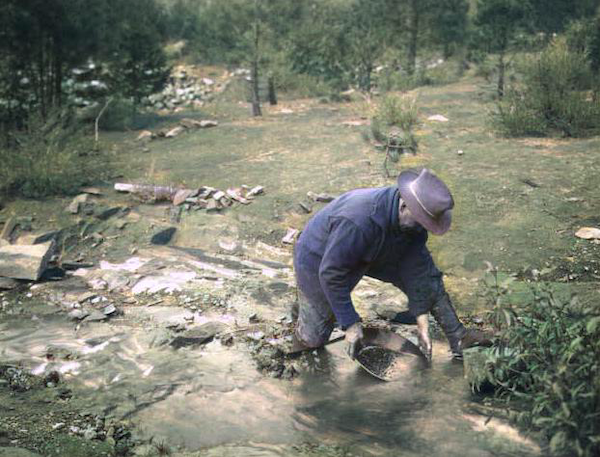 An early miner panning for gold in the Blewett Pass area. Most of the creeks and gulches in this area will produce gold. Miners have been exploring this area for over 150 years. There’s still decent gold in the historic areas, but be sure to check on claim status. Many of the known areas are actively claimed, and may require permission to legally prospect.

From Peshastin, anywhere along the Wenatchee River downstream to the confluence with the Columbia will produce gold dust if you pan in the right spot. The challenge will be to find open ground to prospect, as its mainly private lands in this section. Access via rafts or kayaks may be a good way to access the river gravel in this section.

Expect gold to be extra fine as you move down lower in the river system. Since it likely originate far upstream and has worked its way down from the mountains and streams to make it this far, the resulting gold will likely be waterworn and very small in size. Don’t expect any word-record nuggets… take extra care to pan carefully and look for the tiniest of specks.

Tips for Finding Gold with a Sluice Box