It’s no surprise that California would have some interesting ghost towns, given the discovery of gold at Sutter’s Mill in 1848, and the subsequent gold rush. Let’s take a look at three of the best ghost towns in California.

Bodie is one of California’s best preserved ghost towns. During it’s heyday there were thousand of men mining high-grade or from the surrounding hills.

The western slopes of the Sierra Nevada range began to see a decline by the 1850s, and prospectors began to range further east in hopes of finding richer prospecting grounds. In 1859 near a place known later as Bodie Bluff, William S. Bodey made a gold discovery with three other fellows. All agreed they should keep the find quiet until the following spring, but Bodey decided to return on his own with a Cherokee by the name of Black Taylor. They bought supplies for the winter in Monoville, but Bodey had the misfortune to die in a blizzard on the return trip to the cabin.

There were so many gold strikes in the vicinity that Bodie was pretty much ignored. The Bunker Hill Mine built a mill in 1861, but it remained only a small camp with twenty or so miners in residence. In 1877 Bunker Hill sold out to Standard Mining Company, and then Bodie’s luck changed. One of the mines caved in, exposing a rich vein in 1876, followed by another lucky strike in 1878. Within six weeks the Bodie mine had produced a million dollars worth of gold.

Now the town of Bodie took off like a roman candle. Within a year Bodie had 10,000 residents. Boom towns mean saloons, opium dens, brothels, and gambling halls. One hundred gallon barrels of whiskey were brought into town, and the beer breweries were operational round the clock. There were even some legitimate businesses. Several banks, eventually a couple of churches, newspapers and a school tried to balance out the seedier side of Bodie, but by and large it was a rough and lawless place.

Murder could be a daily occurrence, as well as robbery. In 1881, Reverend F. M. Warrington referred to Bodie as “a sea of sin, lashed by the tempests of lust and passion.” Upon learning that her family was moving to Bodie to seek their fortune, one child is quoted as saying, “Goodbye God! We are going to Bodie.”

The boom was short, and by 1882 the population was less than half what it was, with people moving on to the next big thing. In 1887, the Standard Mine and the Bodie Mine merged and operated with success for the next twenty years. The estimation is that Bodie produced approximately $100 million in gold .

Most of the business district burned down in 1892, and in 1898 a fire destroyed the mill, although the next year it was rebuilt. After World War II, the Lucky Boy Mine which was the last active mine, was shut down. By that time, the population of Bodie was six. Two were murdered, and the rest supposedly died suspiciously spooky deaths.
Bodie was declared a State Historic Park in 1962, and in 1964 was named a California Historic Site, as well as a National Historic Site. It is unusually well-preserved, with 168 structures still standing, and the cemetery remains. The town has not been restored, but it is protected, making it one of the best ghost towns in California.

Bodie has its share of ghost stories. Some people have encountered a Chinese woman who is not all that friendly to adults, but seems to like children. Others have heard the laughter of a child, or seen a woman looking down from a window. By far the best ghost story, however, is the Bodie Curse. Supposedly if anyone removes any artifact from the town they will be stricken with bad luck, and the park rangers will tell you they frequently receive letters from people that include a nail or a piece of wood that they pilfered as a souvenir. The letters apologize profusely for taking something, describe the bad fortune that has followed them since, and are anxious to return the item. Chances are pretty good that this story is put about by Park Rangers in an effort to keep pilfering to a minimum, but it’s a darned good story just the same.

Calico is another wonderfully preserved ghost towns in Southern California. This is a very popular tourist destination today.

Silver was found in small quantities on the southern slope of the Calico Mountains in 1875, but the find didn’t generate much excitement. Five years on, some strikes that were worth $500 per ton created a minor rush, and a lot of filed claims. Calico’s richest mine, the Silver King, was discovered in 1881, and within a year a tent city had sprung up, with some adobe buildings being built.

Calico had its ups and downs. In 1882 a stamp mill begin to work the ore there, but a year later miners found borax near Borate, and dashed off to make there fortunes there. Later that same year most of Calico burned to the ground, but it was rebuilt and grew to 2,500 with the discovery of more silver in 1884. A narrow gauge railroad was built to connect the Silver King Mine and the Oro Grande Mining Company in 1888. There were the usual dance halls, saloons and gambling establishments, as well as regular businesses. The Calico Mining District was one of the richest in California by the late 1800s, and eventually produced $45 million in Borax as well as $86 million in silver.

The boom never lasts forever, and silver dropped from $1.31 per ounce to just 63 cents per ounce in the mid 1980s, and that sealed the fate of Calico. The Calico railroad shut down in when borax mining ended in 1907, the town was declared officially dead.

Walter Knott of Knott’s Berry Farm bought the site of the town in 1950 and undertook restorations. He had spent time in Calico with his uncle when he was a boy, and had fond memories of working a silver mine around the 1913. A one mile stretch of the narrow gauge railroad has been rebuilt, and takes visitors on a tour of the buildings and mining sites. However, most of the buildings are either restored, or newly built to be as authentic as possible. Only about one-third of the town is original.

Unlike Bodie, Calico has been reconstructed to give tourists the “feel” of a wild west mining town. You may even catch a gunfight on main street!

Naturally Calico is not without its ghosts. There is Lucy Bell King Lane, who lived in Calico for nearly seventy years. Her house has been turned into a museum. You may see her walking about the town, or notice her rocking chair moving on its own. You might catch the little girl who leans out of the window of the school house and waves at tourists. And if you notice a large white-bearded man walking the streets, that will be Tumbleweed Harris, who was Calico’s marshall for seven years.

Although Calico is not in original condition, it is a fun destination for families with children. When I was there, you could still order a Sarsaparilla at the bar! Imagine my shock when I discovered it was just root beer.

Also Read: These 3 Huge Gold Nuggets were Found in California

And: A 156-Ounce Gold Nugget found in Southern California

In 1848, James Marshall found the very first gold in California on the South Fork River, and so began the famous California Gold Rush. The town of Coloma existed between Mormon Island and Sutter’s mill, and is considered to be the most consequential mining town of the great gold rush.

James Marshall was an employee of Johann Sutter, the owner of the famous Sutter’s Mill. His plan was to establish a great settlement there, and the Mexican governor of California, Governor Alvarado, granted him 50,000 acres of land. Needing lumber for the project, he hired Marshall in 1845 to construct a sawmill some 40 mils east of his settlement in the Coloma Valley. Supplies were difficult to bring in, and the construction did not begin until two years later. When the mill was nearly completed in January of 1848, Sutter came to do an inspection of the mill’s water flow and happened to find a gold nugget the size of a pea. The rush was on, although sadly Marshall and Sutter realized no profit from the gold discovery. 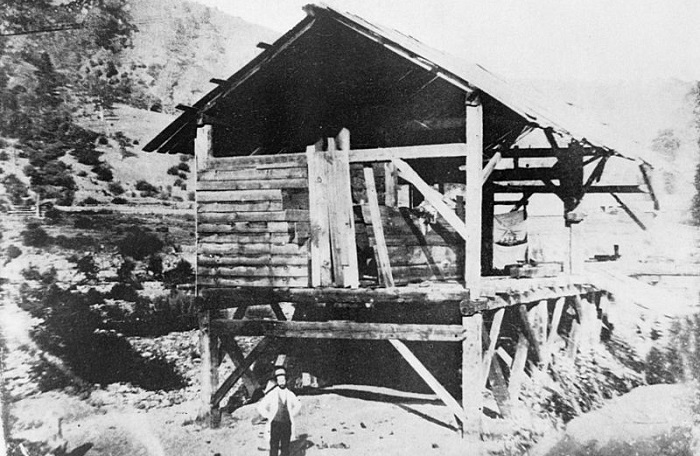 There was probably no single event that had a bigger impact on the American West than the discovery of gold at Sutter’s Mill in Coloma.

With the onslaught of 80,000 miners into the area, and spreading throughout the Sacramento Valley, Sutter’s vision of a great colony was ruined, as it was completely overrun. The native American tribe was displaced as well.

The town of Coloma was in the right place at the right time. As it was already established, with a hotel being constructed and approximately 300 buildings in the town, it was an ideal place for the prospectors to head when they first came into California via San Francisco. All the usual businesses, savory and unsavory, already existed in Coloma, but the new people flooding in were flabbergasted at the high price of living. Coloma was a fairly remote area and “supply and demand” was the rule of the day, with a shovel or a pick costing as much as $50.

With the creation of El Dorado County in February of 1848, Coloma became the county seat. The miners brought water from the snow and rain in the nearby mountains via a six mile ditch so the placers could be worked.

Law and order was kept by the owner of the general store by name of Captain Shannon, who was voted the first mayor of the town. He was widely respected, and expected to keep people in line, and he did so with sentences such as branding, banishment, whipping or maybe even cutting one or two ears off!. And of course there were the requisite hangings.

Just as with every boom town, the good times could not last forever. The miners began to spread through the area looking for ever richer strikes, and Coloma began to lose its population. Also, in 1854 it lost its distinction as the county seat, which was moved to Placerville, as there was more mining action there at that time than there was near Coloma.

Although Coloma is referred to as a ghost town, there are still approximately 200 people who reside there. The majority of the site of the old town is located in Marshall Gold Discovery State Park. There are quite a few original buildings in Coloma, and although the original building of Sutter’s Mill is long gone, a replica has been built, and visitors can enjoy perusing the old cemetery, a museum, and just enjoy taking a walk through the old town.

There are literally hundreds of ghost towns in California. Some of them are long-gone with nothing left standing. Others like the three listed above are well-preserved and very exciting places to visit today.

Below are some links to a few other California ghost towns and more information about the California Gold Rush.

American River: The Start of the California Gold Rush

The Feather River in California is Loaded with Gold!