California is a metal detecting paradise. The state has a rich history and presents an opportunity for just about anyone to discover something valuable regardless of where you live in the state.

For treasure hunters, California has it all.

Let’s take a look at some options for places to go metal detecting in California.

Hunting for Gold Nuggets in California

Gold was first discovered in the territory that now forms the state in the 1500s by the natives, Mexicans and the Spaniards who mined along the Colorado River, San Gabriel River and in Santa Cruz. All these were small operations that didn’t last for long.

The discovery of gold near Sacramento at the famous Sutter’s Mill on the American River led to the great California Gold Rush of 1848. The gold rush was also a catalyst for further prospecting throughout the state and the resulting migration of thousands of people to California.

Gold and other minerals have been mined in California since then. The mining activities have led to an abundance of ghost towns and other abandoned places that present a great opportunity for metal detecting today. Just focusing on old mining areas there are literally hundreds, if not thousands of ghost towns and old abandoned mining camps that you could search with a metal detector.

Of course there are also still lots of gold nuggets that you can find too! All of the old historic mining areas throughout the California Mother Lode still have large gold nuggets. In fact a 6-pound gold nugget was found with a metal detector as recently as 2014!

There are plenty of other places to go metal detecting for gold nuggets in California, and there are definitely some big ones out there yet to be found!

In California, there are thousands of acres of federal lands managed by the Bureau of Land Management (BLM) and the United States Forest Service (USFS) on behalf of the federal government. These lands are managed by the government, but they are public lands and belong to you and me!

Generally speaking the public lands managed by the BLM allow for metal detecting, although there are some exceptions such as places that are known historical sites. It’s never a bad idea to call the local land manager and get clarification on any areas of special concern.

Some of the best places to search for gold nuggets are on public lands. You can also search for coins and jewelry too. There are certain regulations related to detecting relics on public lands, so make sure you know and understand the laws completely before you go.

State Parks are always great areas to search for coins and jewelry because there are so many people that visit them. Sometimes they are also historic sites where you can find older coins and relics too.

Most state parks in California allow metal detecting. However, the state laws prohibit digging and disturbing vegetation in the parks. This does not mean that you cannot metal detects in the parks, but you need to learn to dig a clean plug so that you don’t damage the grass.

Some smaller county parks don’t allow digging completely while others still do. Often times there really aren’t any rules in writing, and it all comes down to the decision of the park superintendent. It pays to be respectful in these situations.

Even parks that don’t allow digging have been known to “change their tune” if you show that your metal detecting is for the benefit of the park. For example, there are people who report being allowed to metal detect in park lakes after showing the park managers that metal detecting will help remove debris from the lakes and thus make it much safer.

I always like to keep my junk pile handy, and if anyone questions your detecting then show them how much garbage you are helping to clean up with your metal detector!

Of course it’s no secret that California has lots of beautiful sandy beaches that attract lots of people who want to spend their leisure time on the beach or the ocean waters. This makes the beaches great places to find valuables such as gold earrings, rings, coins, and just about any item of value. 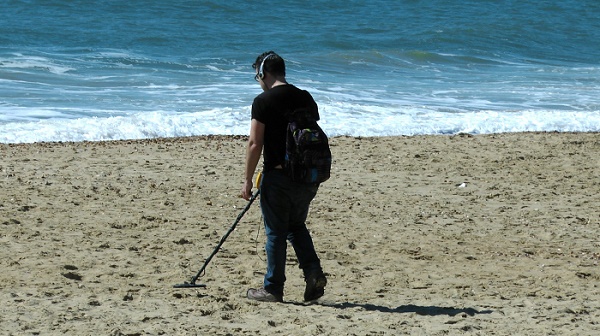 Beaches under the management of the state allow metal detecting. If you are new in California try your luck along the popular beach in Southern California since there are so many people with thousands of visitors each day. Beaches in Orange County are quite popular and will present a great opportunity to discover something valuable.

Always cover your holes after digging as a sign of respect.

Like most other states, California has its own share of lost treasure. There are stories of treasure buried in many different locations across the state. A cache of gold coins valued at over $10 million dollars was discovered a few years ago. It’s out there! 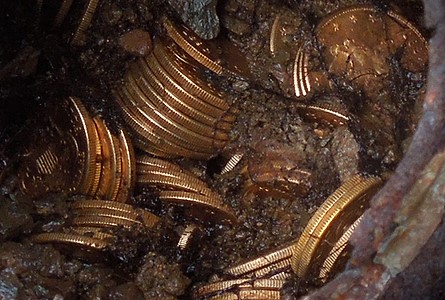 The “Saddle Ridge Hoard” discovered in 2013. It was found in the Sierra Nevada Mountains of northern California and is valued at over $10 million dollars.

To successfully find a lost treasure you will need to research on a specific treasure within your locality. This is important as it will help equip you with information on the exact locations of the said lost treasures. You need to know where to use your metal detector and research is key.

Some of the places you might be able to find lost treasure in California include:

*The Mountaineer Roadhouse, along Folsom Road near Auburn. It was a popular hideout for the outlaws of the 1800s and there are reports of several buried treasure in the area.

*The Ruins of the Mission San Pedro, along the Colorado River near the American Canal, was a mission where missionaries hid treasure of unknown value in 1871 before everyone was killed during an Indian attack.

*Borrego Valley near Carrizozo has a treasure story where gold was hidden after a train carrying the gold was attacked by Indians.

*New River Canyon where an outlaw who robbed $28,000 from the Willow Creek Post Office is thought to have buried the loot near the mouth of the New River.

There are so many treasure stories in California. Some of them may be tall tales. Others have probably been found by treasure hunters already, but there is no doubt that there are still some out there yet to be discovered.

The Lost White Cement Mine of Mono County

The Lost Gunsight Mine in Death Valley

Many old mines, early settlements and ghost towns in California are private properties. These sites may be more challenging to get access to, but private property offers a great opportunity for metal detectorists for find sites that haven’t been searched yet.

All you need to get the permission is to contact the owners of the property you are interested in and ask for permission. Sure, many will turn you down, but you never know until you ask. I have gained access to some great areas by simply asking a landowner for permission to hunt for a few hours.

California has a rich history and centuries of early settlement, meaning that there are lots of amazing things that you can find with a metal detector.

Early Spanish explorers were in California as early as the 16th century looking for gold. And of course later in 1848, the discovery of gold at Sutter’s Mill brought hundreds of thousands more men hopeful to strike it rich. These people left behind coins, relics, and many metal items that you can find with your metal detector.

There is lots of gold in California that the early miners didn’t find. Get a good metal detector that can find gold

and you might get lucky and start finding gold nuggets!

If that isn’t your thing, you can always hunt the parks. People spend time here, and they lose stuff. Parks are great places to metal detect.

Beaches are also great places to hunt. People lose so many valuables at the beach. You could find a piece of jewelry worth thousands of dollars!

California has so many different options for places to explore and hunt, with a bit of research and a good quality metal detector you will be making great finds in no time.

And: 3 Old Ghost Towns in California you Must Visit