The quest for gold and other treasures from the new world dates back to many centuries ago. This is what drove the Spanish explorers and conquerors to the Americas and this is what gave rise to several legends such as the story of the lost city of El Dorado.

In the 16 century, the Spanish explorers who visited South America observed that the locals near the ocean had lots of artifacts, jewelry and other items made from pure gold. They also heard of stories about a king who on his coronation would cover himself and then dip himself in a lake to appease the gods. In addition, the king will also through gold and other valuables made of gold in the lake. 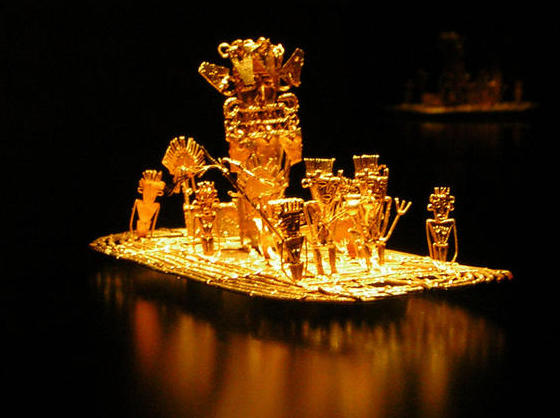 The explorers were made to believe that there was a city someone in the interior of South America full of riches and gold of untold value.

Also Read: Where did the Egyptians get their Gold?

Origins of the Legend

The tale of El Dorado was started in early 16th century by returning Spanish explorers who told of the story they had heard about the native tribe in South American who lived high in the Andes Mountains in the region that now occupies the modern-day Colombia.

According to the tales when even a new chieftain ascended to power a grand ceremony was held at Lake Guatavita. The new ruler was covered in gold and lots of items were brought to the lake for the purposes of appeasing the underwater god. The Spanish explorers referred to chief in their tale as “the gilded one” or simply the golden chief El Dorado.

The Muisca tribe lived in in the highlands of Boyaca and Cundinamarca starting in 1270 BC. Just like neighboring communities such as the Maya, Inca and Aztec, they had had advanced techniques in working with gold and other precious metals.

Whenever a chief died a new one had to be appointed. The new chief will then spend a few days in speculation away from women and feeding on salt-free foods. Then on the first day as the chief, he will be led to Lake Guatavita covered in gold and with hundreds of gold items in readiness to offer sacrifice to the underwater god. He washed in the lake and then threw all the golden items in the lake.

The Muisca had several places they considered sacred such as lakes, forests, rocks and rivers where they would gather to offer sacrifices and perform rituals to their gods. Gold and other precious metal played an important role in all the rituals performed by the Muisca Indians.

By early 16th century, Spanish conquistadores had found a lot of artifacts and jewelry made of gold in the native communities that lived on the coast of South America.

Also Read: Aztec Riches – What was the Source of all that Gold?

After the word about the lost city of El Dorado spread, there were many expeditions trying to find it and recover all its gold. The first search for El Dorado was led by German conquistadors Georg Von Speyer and Nikolaus Federmann who, between 1531 and 1538, searched the Llanos Orientales, the Colombian plateaus, the Venezuelan lowlands and the Orinoco Basin for the Lost City of El Dorado. These expeditions did not bear any fruits.

This was followed by a search by a team of other German Conquistadors led Philipp Von Hutten and Von Speyer. The Pair together with their team started out in 1536 and reached the Rio Japura headwaters in 1538. They retreated back to Venezuela.

In 1541, Von Hutten when in search of the city again with a team of 150 men from Coro. They went past Ro Bermejo and reached Los Llanos in 154 but were forced to retreat by the Omaguas fighters. On their way back they were executed by the Spanish authorities at El Tocuyo.

While the conquistadors were trying to find El Dorado their Spanish counterparts were also. Sebastian de Belalcazar dispatched captains Ampudia and Anasco in 1535 to find El Dorado. The two searched the region east of Quito but only found cinnamon trees.

In 1536 Spanish Conquistador Gonzalo Jaminez de Quesada and his brother Hernan Perez de Quesada led an army of 800 men through Peru, conquering the native Muisca and recovering a lot of gold from them, but no golden city was found.

There were several other attempts to find the lost city led by Spanish, German and British explorers but none came to much success.

Lake Guatavita was discovered for the first time by the conquistadors in 1537 by Gonzale Jimenez de Quesada and his team once they had conquered the Muisca. In 1545 conquistadores Hernana Perez de Quesada and Lazaro Fonte tried to drain the lake but after three months they had only reduced the water levels by 3 meters and only recovered a small amount of gold on the shallow ends of the lake.

In 1580 another attempt was made to drain the lake by Antonio de Supulvede. He cut a rim in the lake and reduced the water levels to about 20 meters. A lot of golden artifacts and pieces of jewelry were discovered. They were unable to reach the center of the lake where it was believed the gold and precious metals were thrown.

In 1898 the final attempt to drain the lake was carried out by the Contractors Ltd of London. They drained the lake significantly but the mud made it impossible to recover much gold from it.

In 1956 the Colombian government in an effort to save Lake Guatavita it designated it as a protected area. This made further attempts to drain the lake illegal and the mystery remains.

Of course, tales of a golden city are surely exaggerated. Certainly there was a lot of gold in this region, and all of the cultures used gold as a medium of art and wealth.

In all likelihood, the gold was mined from the mountains just like any other. And while they may very well have accumulated riches beyond what the Spaniards had ever seen, no one has yet to lay eyes on the Lost City of El Dorado.

Next: 7 Things to Consider When Searching for Buried Treasure