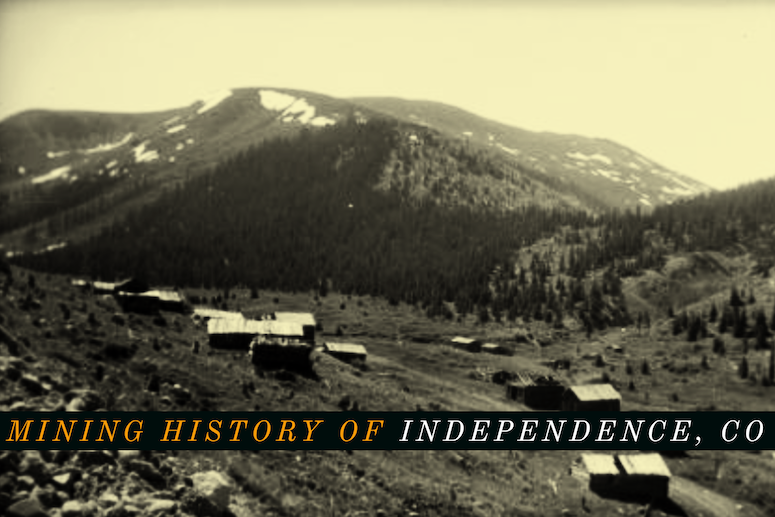 Imagine you and your mining crew set out on a journey prospecting for minerals only to strike immense deposits of gold on Independence Day. Well, that is precisely what happened in the eastern corner of Pitkin County, right below the continental divide in 1879 when a group of miners found gold in that region on July 4th.

This once-bustling town’s origins can be traced to growing rumors of vast mineral deposits within the Roaring Fork Valley. Prospectors from Leadville traveled beyond the divide, and a small camp of miners was lucky enough to uncover gold downstream of the Roaring Fork River.

This discovery fueled the reports further, and despite the current Colorado Governor Fredrick Pitkin’s directive forbidding Europeans from crossing the divide due to hostile relations with Ute Native American Tribe, hundreds trekked hoping to make a fortune.

The Growth of Independence

The miners who reached the camp set up the mining district (their form of government to protect the miner’s interests admits the hostility) and by 1880 the town had a population of 150 individuals. Slowly the small camp that was dotted with tents witnessed the establishment of small permanent buildings plus a small community of 300 residents.

Prospects for gold drew in investors from Leadville. In 1881, the Farewell Consolidated Mining Company purchased land and mining claims, eventually controlling the majority of the valuable mines.

Gold within the rocky mountain scope of Independence mainly was found within ores that consisted of auriferous copper pyrites, and to process the mines ores, Farewell established a stamp mill and a sawmill.

Miners streamed in and the town experienced a significant boom. By 1882 there were 1500 residents, seven restaurants, over forty business enterprises, five saloons, and even a local newspaper titled the Miner. Independence also had two boarding houses where miners could get a room and board for just $2.

1882 was also the year marked with the highest volume of gold mined as a year since the Farewell mines were set up; they produced gold valued at $190,000 (Back when gold was worth a little over $20 per ounce.)

Nearby, the town of Aspen slowly rose in favor of the town to be in, miners and residents slowly left Independence. Not only did Aspen have milder weather due to lower elevation, but it also provided more excellent economic opportunities as a result of the Sherman Silver Purchase Act, which stated that the federal government had to purchase silver produced by mines to support the dollar. Aspen was full of silver, with numerous mining companies backed by wealthy investors set up camp.

As Aspen continued to boom, it became especially with railroads reaching the town by the late 1880s, the populous in Independence continued to dwindle.

Aspen’s rise was not the only reason behind the fall of Independence, as even though the year 1882 seemed golden with its high volumes of mineral produce, no one knew that the gold deposits were already on the decline. In great contrast to the previous year, 1883 was marred with shallow volumes with just $2000 worth of golf being produced. With a production difference of over $180,000, Farewell shut down their mines in that year. Independence collapsed as fast as it grew, and by 1880, only 100 residents remained.

The 1889 storm was the final nail in the coffin in sealing Independence fate, transforming it into a ghost town. Due to the town’s high elevation over 12000 feet, it often came under heavy snow cover from late October to mid-May. However, on that year, seven major snowstorms struck the town, isolating it, and eventually the supplies for the remaining residents ran out.

All but one resident moved to evacuate by tearing off the sliding planks of their houses and using them to skies down the valley to Aspen. They had fun while competing to see who will make it their first and dubbed it the “Hunter Pass Tenderfoot Snowshoe Club Race.”

Independence town was the first successful mining settlement in the Roaring Folk Valley; unfortunately, its success did not last as it was abandoned entirely in 1912. Although very little of the infrastructure remains, anyone can access this now ghost site during summer months.

Mine Tours & Gold Panning in Breckenridge