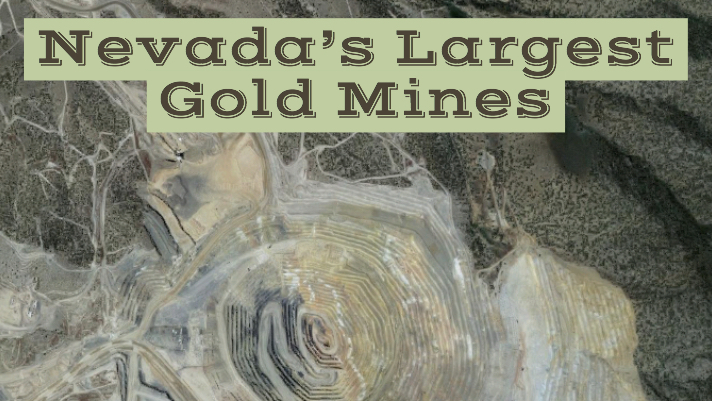 Gold mining is a major industry in Nevada. Unlike most other states in the U.S., there are still many active large gold mines. In fact, Nevada is one of the major and reliable sources of gold globally.

Most of the mines in the state produce gold through open pit mining by using heap leaching method of recovery. Therefore, let’s explore the major gold mines found in the state of Nevada, and their primary minerals.

One of the major gold producing mines in Nevada is the Goldstrike Mine. This mine is known to be the largest gold mine in North America. It is located in Eureka County, right in north-eastern region of Nevada. Gold is its primary mineral.

The Jerritt Canyon Mine is a gold producing mine, which began its production through open pit mining, but later introduced underground mining. The mine is in Elko County.

The Cortez Gold Mine is yet another big mine with amazing gold production. The mine is situated about 70 miles southwest of Elko, and operates in three units namely the Cortez open pit as well as two Carlin-type disseminated gold deposits-Pipeline and South Pipeline. These carlin deposits are noteworthy because nearly all of the gold is microscopic in size.

Another well-known gold mine in Nevada is the Getchell Mine. This mine is located in Humboldt County in the eastern part of the Osgood Mountains. This mine is situated about 35 miles northeast of Winnemucca.

Discussion of Nevada’s gold mining would not be complete without the mention of the Round Mountain Gold Mine. This is one of the largest gold mines in Nevada and the United States. This is yet another open pit mine. It is located in the Nye County. Its primary minerals are gold and silver.

The Twin Creek Mine is location lies about 40 miles from Winnemucca in Humboldt County. This general area is rich with gold. Not only do the large mining companies search here, but also prospectors using metal detectors have good success in the desert around Winnemucca.

Other good report bearing mines include the Borealis Mine, one of the major contributors to Nevada’s gold mining activities and records. Its primary mineral is gold, and is located in the Mineral County within the famed Lucky Boy mining district.

Coeur Rochester Mine is an open pit mine whose primary minerals include gold and silver. Its location is in the Pershing County, about 13 miles in the north-eastern direction of Lovelock. This mine is not too far from the Rye Patch Placers which still produces nice gold nuggets.

The Robinson Mine is also among the leading gold mines in the state. Its primary minerals are gold and copper. It is in White Pine County.

The Marigold Mine is also among the famous gold mines within Nevada. The major mineral resource extracted here is gold. The mine is located in the Battle Mountain area, a remote desert region with some of the richest gold reserves in the world.

Large Mines in the Nevada Desert

Gold mining activity has taken place all over the state of Nevada. Today, most of the mining activity is centered in the northern part of the state. Humboldt, Pershing, Elko, and Mineral Counties account for many of the largest open pit mines.

Most of the famous gold mines active today are mining within the Carlin Trend. This is a massive ore body that was discovered relatively recently which contains microscopic particles of gold. Easily missed by the early miners, geologists have discovered that this low-grade ore is so widespread that it can be profitably mined using modern methods.

One thing that successful mines have in common today is that they are massive. Small miners cannot profitably work ores like those within the Carlin Trend. It requires massive investment to bring a major mine into operation.

Nevada is one state where a favorable political climate has allowed these large mining operations to flourish. This is the reason that the vast majority of both gold and silver being mined in the US today is coming from these huge Nevada mines.